In the ongoing train wreck saga that is Nadya Suleman, there is certainly no shortage of material to write about. Where do I start?

In this interview with Ann Curry of the Today Show, Suleman defends herself against her many critics. Apparently (and not surprisingly), the primary thrust of anger directed at Suleman concerns the fact that despite having no job and 6 children already to support, she deliberately set out to have an entire brood of additional children with no means to support them, leaving the expense to the taxpayers. Interestingly, in her first interview with Ann Curry, Suleman had stated she and her children do not receive welfare, however it has since come to light that she receives food stamps as well as a total of $1,800 per month in SSI payments for her autistic son and 2 other children with disabilities (said disabilities, by the way, are more likely in multiple births - another reason it is selfish to be implanted with multiple embryos).

Suleman's explanation? "I am not living off of any taxpayer money. If I am - if it is food stamps - it's a temporary resource. We receive no cash and it's every month - about $190 - and it's going for food."

She then goes on to defend herself against statements made by her own mother who claimed that Nadya is incapable of of caring for 14 children. Nadya's response? "What human in this planet is capable to take care of 14 independently without support from family, from friends, from church!?"

Precisely! This is exactly why a jobless, broke, single mother with 6 kids has no business having 8 more!

Let me ask you a question, Nadya. Did you consult with your family, friends and church members before you voluntarily got implanted with a multitude of embryos to ascertain whether they were willing or interested in "helping" you with a new litter of 8 children? Did it ever occur to you that perhaps people have their own lives to live, their own spouses and/or children to care for? Maybe they would like to focus on them. Maybe they would like to attend to their own families, instead of sacrificing their time, money and effort to accommodate your selfish desire for a boatload of kids that you have no means to support or care for.

Suleman says (with a chuckle) that we've all heard the saying "it takes a village to raise a child. Well, this will take a lot of villages!"

Thanks, Nadya, for volunteering us all to take care of the problems you've created.

Despite her desire for the villagers to rally together to tend to her family, she simultaneously holds the view that people should not "dissect" her life or make judgements about it. "It's really kind of sick because I think people really need to focus on their own lives...and stop trying to fixate on other people. I think that's unfortunate for them."

Good point, Nadya. Actually, we'd like to focus on our own lives, but since you recruited us villagers to raise your children, our focus has understandably shifted to you.

On a separate, but related issue, I pose a question to you today. How is it that someone who has no job, lives at home with her parents, has a boatload of children to support and is living off of food stamps, disability payments and student loans, can afford to have substantial plastic surgery costing (according to one plastic surgeon) in the area of $20,000? Don't know what I am talking about? Check out these 2 photos of Suleman - one from a few years ago and a recent photo - and tell me if anything looks suspicious to you:

Let's connect the dots here. Could it be that her obsession with having children has been fueled (or exacerbated) by the rampant pronatalist glorification and worship of breeding and motherhood in the media? Could it be that Suleman craves the adoration heaped upon the Queen-of-all-prolific-Mothers, Angelina Jolie? 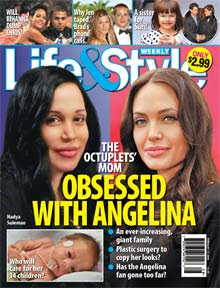 I have written quite a bit about the danger of media pronatalism and this is the ultimate example of what can happen to people who get whisked away on the pronatalist train as it careens down the tracks.

(I don't blame Angelina, by the way. She is apparently just as creeped out by Suleman as the rest of us.)

Posted by Childfreeeee at 11:24 AM

In one of the articles I read, it was stated that she had used some of the disability payments for the previous 6 to pay for the IVF for the current 8.

The train is just careening off the tracks into the depths of Crazytown!

As a man who plans to clone himself 14 times, go on welfare, hire a publicist and beg for donations online, I find criticism of such actions offensive.

I do these things selflessly and only for the babies.

I thought the exact same thing when I saw this....she wants us to mind our own business, but she still needs us as "the village." I wonder who she thinks pays for those food stamps and disability payments?

OMG Big Red you are TOO FUNNY. I almost peed myself!