Friend, Thy Name is Narcissus 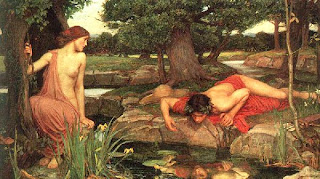 Are you up for a long story today?

Given this thorough brainwashing, is it any wonder that parents (especially women) believe they are God the second they pop out a child? That trumpets of heaven will sound the moment they become parents? That everyone around them will bow down in worship? That we will be hanging on their every word and action? That their role as mother trumps all else?
Thankfully, there are parents who do not fall under this brainwashing spell - they are small in number, but they are out there (some of them are friends of mine). In the meantime, it can be difficult and hazardous navigating our way among all the others.
Posted by Childfreeeee at 3:27 AM 11 comments:

Visit msnbc.com for Breaking News, World News, and News about the Economy

The Today Show likes to talk about families, and babies, and pregnancy and parenting A LOT. They spend lots of air time promoting and glorifying parenthood - just one of the thousands of voices in the deafening chorus of media pronatalists singing the praises of having children and providing endless support and encouragement for people who choose that lifestyle. I challenge you to find one 30-minute slot on The Today Show in which you will not be subjected to a piece on motherhood, or babies, or parenting techniques, or infertility treatments, or mid-life mothering, or debates over innoculations, or child discipline, or child health issues and the list goes on adfinitum. The pro-parenthood propoganda never stops...

I agree with Dr. Almighty, but here's the rub: The Today Show is one of the very outlets that relentlessly feeds our culture's breeding obsession, and fuels the attention-seeking, baby-obsessed psychosis of human breeding machines like Nadya Suleman. This in turn ramps up the demand for unethical doctors who will do whatever they can to service women like Octomom, yet now The Today Show stands in judgement of the very monster it helped to create.

The Today Show may cast all the stones it likes, but today I am casting some stones right back at it.

A Lovely Letter from a Reader

I received a lovely e-mail from a reader of this blog who gave me her permission to share it with you. It really warmed my heart in more ways than one. (Thanks A)

I just wanted to say thank you for your blog, it has been so insightful and interesting to read, particularly as I share your values. My husband and I have declared ourselves completely and utterly child free and are just loving our lives. It has been hard though as we are now reaching the age where children are expected of us (I am 27, he is 33) and it has began to get harder and harder to avoid the "pitying" glances when we explain we have no interest. Luckily my parents are wonderful and have put no pressure on us, although my mother sometimes says "give it a while" whereas my husband's parents have only recently come around to us - a couple of years ago we were "selfish" and now they say they respect whatever we choose. It is also beginning to reduce our social circle as friends vanish off the face of the earth, or so it seems. This is a shame but inevitable as we are no longer of any use - our home is not a place for baby sitting or children in general - spiky furniture, fragile ornaments and orchids and my precious fish tanks. And I love it that way.

It is very exciting to know that there are others out there that are coming to the realisation that having children is not a requirement (I think I was about 23 when I realised I didn't HAVE to have children) and reading blogs like yours is very inspiring - in fact I have read all of your blog in one day. I can do this as I am at home, on my own, while I am in the middle of a career change - which I can do because I don't have mouths to feed. I may also be about to undertake a degree - which I can do as it is my money and my time. I love it! My husband, the eternal child anyway, may actually have realised earlier than I did that kids were not in the plan. His favourite thing is to be left alone after work, to play on the computer, read e-mails and relax with a big gin before joining me to do whatever we want whenever we want. A night in or out can be spontaneous and we are so happy. Going to the shops is an experience these days and often encounter at screaming children, strollers (Why do mothers attempt to take these things down the most insane narrow streets? Why do they seem to think they have the right of way with these behemoths when the child is nine times out of ten in one of the parents arms??) we tend to catch each others eyes and the relief and absolute pleasure that we will never have to go through it is just... fabulous!

Anyway, this is getting overly long, I just felt compelled to write and thank you for a very refreshing blog with some excellent insights and a very captivating read! 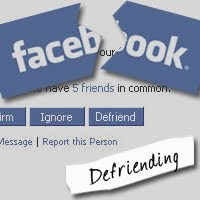 Remember my recent post about the Facebook "friend" whose non-stop updates about the minutia of her baby's life were driving me crazy?

We're not friends anymore.
One day, she posted yet another baby-related status update announcing that the cost of daycare is CRIMINAL and she can't believe it's 40% higher than it was back when she had her first child (who is now 11). So a bunch of her FB friends (parents) posted comments to her update sympathizing and agreeing with her, some specifying how much they pay for childcare and what an outrage it is. It was a big pity party.
So, feeling a little frisky that day, I posted this comment: "Another reason I am happy we don't have kids".
A day or so later, I went back to that thread to read comments after mine and guess what? My comment was gone. She deleted it! So guess what I did? I deleted her. I de-friended her. I know that sounds extreme and probably makes me an official Facebook meanie, but we were just acquaintences and I had been tossing around the idea of de-friending her for some time because her incessant "Baby Joey" updates had been driving me spit-bubbles (hence my vent on this blog). She is a nice person, though, and to date I had always felt too guilty to de-friend her. I just couldn't bring myself to do it - until now.
Of course, just my luck: she immediately noticed that I de-friended her, assumed it was because she had deleted my comment and sent me a private message apologizing and explaining her reasons for doing so. Apparently one of her FB friends is a young woman who is pregnant and anxious about having children and she thought my comment might make her feel even more anxious. She said she occasionally deletes friends' comments if she thinks they will hurt or offend any of her other friends. She encouraged me to re-friend her.
My response to her was that I didn't see how my little comment about being happy we don't have kids is any more anxiety-producing than the drawn-out discussion about how expensive childcare is. If anything is going to produce anxiety in a young, nervous mother-to-be, I think a detailed accounting of exhorbitant daycare costs will do it. Realizing that I did not want to re-friend her, I decided to be honest and told her that I think she's a really nice person and I wish her all the best, but I wasn't connecting with her constant updates about the baby and it felt like too much for me.
She got defensive and didn't take it well, and the conversation went downhill from there. She accused me of being closed-minded, saying that she has FB friends of all kinds - people who have kids, people who don't have kids, people who like kids, and people who don't like kids, and they are all open-minded enough to indulge her updates.
At this point, I could have let it die (and perhaps I should have), but I didn't. Let's just say I was in a mood. So I told her that I think it would be helpful for her to consider her audience when posting updates. Perhaps her friends may like to hear about other things besides her baby and may tire of hearing every single detail of Baby Joey's life and nothing else. I gave her the example of my cat (the example I wrote about in here) and asked her if she would enjoy reading daily updates about every aspect of my cat's life and nothing else - her vet visits, the flavor of food she ate this morning, how much hair came out in her daily brushing, the brand of cat litter we use. I told her my feelings about her updates had nothing to do with liking or not liking children, and I was sorry if she took offense with my honesty, but I really thought it would be helpful to her to know the truth of how I feel.
(I didn't say this, but I am also sure many of her non-baby obsessed FB friends who are similarly tired to death of her boring-ass updates would be CHEERING me on for my honesty, if they knew about our exchange).
As you might imagine, my cat-update-comparison didn't go over too well and her reply was something to the effect of "you can't compare cats to kids" and "good riddance" and that was it - the end of our Facebook friendship. I felt a little badly at first because I know I was a bit hard on her, but I think after months of enduring those awful, mind-numbing, narcissistic Baby Joey updates, her deletion of my comment was simply the final straw.

Edited to Add: For those of you who have similar Facebook issues, I have since learned that there is a way to stop a friend's updates from appearing on your wall without de-friending them. If you put your cursor over the friend's name (on their update), you will see a link appear to the right of their update that says "Hide (friend's name)" Click that link to "hide" the person and their updates will no longer show on your wall (although they will still be in your friend list).

Life Going too Well? Have a Baby!

Posted by Childfreeeee at 3:34 AM 4 comments:

Childfree Lifestyle Must be Catching On

Just a quick note in between blog posts.

The childfree lifestyle must really be catching on. Every time I check sitemeter to see how people are referred to my blog, the majority are google searches for "reasons not to have kids" or similar searches.

Do you find that as interesting as I do?
Posted by Childfreeeee at 1:35 AM 9 comments: