Of Course it's All Worth It! 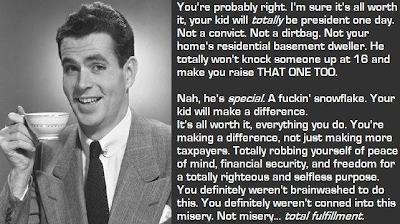 Thanks, CFVixen, for the forward!
Posted by Childfreeeee at 9:10 AM

I don't know how many Americans there have been in the past 225 years, let's say 400 million. There have only been 44 Presidents (since the Constitution, anyway).

So, the odds of your Precious McSnowflake being President are essentially zero. And, given how some of those 44 have behaved, being President isn't such a great thing either. (I'm looking at you, Millard Filmore!)

My family had a huge get-together recently. Being LDS, women are encouraged to marry young and start having babies as soon as possible afterwards. Literally every woman there over age twenty was married, had children, or was pregnant. All the women could talk about was kids and childbirth and diapers and I was just sitting there, bored to tears. The men were little better.
I have a girlfriend whom I love very much-though I have yet to tell anyone my little secret (I'm bi-leaning-lesbian). She doesn't want kids. I don't want kids, and I haven't since I was a little girl. Being raised mormon, I was told there was no other choice. I would have to marry a man and be a mother whether I wanted to or not.
Now, as a closet atheist, I know better. I plan to get steralised to prevent any unfortunate accidents.
I want to finish college. I want to marry my girlfriend at some point, and travel with her. I want to have pets. I want to be happy. My mother is not happy, in large part because of children and the stress they cause.
She dropped out of college for us. While I appeciate the sacrifices she made to keep us alive, but I feel like she shouldn't have had to make them. Honestly, if she never had me, I wouldn't be here to gripe about it, so why would I care?
That being said, I'm here, and I intend to make the most of that. I refuse to be a drain on society. But that means not having kids. And i'm okay with that.

Harsh but true! It's sad because I see so many kids who come from rough upbringings. These kids could be successful if they'd had good parents. But sadly, anyone who's anyone can have a child, and many people are simply unfit parents. People need to think about whether they will raise a child in a healthy environment before having them.

Very true Renee. That's why I cringe inside a little whenever I hear how "having children is a right" or whatever. Actually, I'm not sure it should be a universal "right." Since adults are the ones making the rules and setting the norms, they make rules and norms that benefit them. They only care about their own desires to have kids. They don't care one whit about the child's right to not be born into a shitty situation.

I have no idea how a society would implement or enforce a "non-right" to have kids, and I'm not necessarily advocating that it should. But this mindless bleating that anyone, anywhere should be able to have as many kids as they want no matter what and no one should ever judge them is ridiculous, and frankly offensive to me, as someone who grew up in an emotionally abusive family. My parents should never have had kids. There, I said it. And it always horrifies people when I do, because it punctures their little rose-colored fantasy that a baby is always a wonderful, miraculous thing and Parenting Makes You a Better Person(TM).

Grace, I just wanted to throw out some internet hugs. My family was (is) far-right xtians (hence the abuse) though thankfully, my parents valued education enough to want me to get one before popping out kids. They were initially horrified by my childfreedom (and atheism) but since we barely talk these days (and then, usually about the weather), I'm not sure if they've managed to come to terms.

I love how when people face the upfront tasks they say the job is cruel, awful, and they wouldn't do it. Then when it's flamed up with the title of "mom" all of the awful tasks don't seem to matter anymore. I wonder if this is real if the "applicants" will think twice about having kids or not.

Have you seen this? I wonder if this is true how many "applicants" are thinking twice about having kids. Of course the video backpedals at the end with appreciation for moms on Mother's Day, but I was still listening to the very obvious portion of the film - being a mom sucks.

I absolutely love this blog and the insightful comments by the people who post here!!! I thought you all may enjoy this article, "9 phrases parents need to remove from their vocabularies":

Just a word of warning to the ladies sitting on the fence about having kids. I know a woman very very well and she tells women who are thinking about having kids all the time that 'it was the best years of her life' and to 'just do it'!
I know full well she is full of crap and she lives a miserable existence. It's as if she gets off on giving them bad advice!! Her life is nothing but stress and mess and I hear it all the time. She is miserable!!! Be careful, not everyone has your best interest at heart and misery loves company as the saying goes!!

Thanks @hey1982 for the heads-up...yowsers! I remember seeing on this blog a list of celebrities who were child-free. I appreciate Cameron Diaz's candid approach to this subject and so far, she's still child-free. Here is the article:

It's not worth it AT ALL!!! I just visited a friend out of town over July 4, holiday weekend. As we laughed and talked, while the husbands were asleep... the topic of raising children came up. I have none...she has 3 boys. As we got into conversation, she started TO CRY!!! She told me, quote.."I don't want to talk about kids!" "What hurts the most, is that no matter HOW MUCH you try to help them make the RIGHT choices, they STILL make the WRONG ONES!" This woman was IN PAIN! ALL BECAUSE SHE HAD KIDS!
This is WHY I am 42 years old, and have NEVER regretted NOT having children!!!

There is a question about having kids that I have never found a satisfactory answer to. The shock that new parents experience, which often lasts for years, as they discover how horrible children are. What I don't understand is what happened to these people's memories? They must have spent the first 20 years of their life in childhood, so how is it they don't remember what children are like?

Here I am again,with ANOTHER story of how it's NOT worth it to have kids!
This week, I hung out with friends on their boat. My girlfriend brought along her 14 year old son. As we are enjoying a beautiful summer day on the water with food and cocktails..(don't worry, no drinking and driving,the boat was docked.):)
Anywho, her son decides to get angry at her and call her drunk! This is a woman who NEVER let's her hair down because of ALWAYS taking care of kid and hubby. She should have left her son over his friends house, and came out with her husband alone! As I watched the kid get angry because SHE was having a GOOD TIME (bet he wouldn't have cared if she was doing something for him!),all I could think about was HOW GLAD I am..that I DON'T HAVE an 'Inspector Kid' watching my every move and blocking my fun! Bottom line...wanna have fun? DON'T have 'Fun Blockers'...KIDS!!!

I'd be interested to know what you all think of this article:

@Grace H I’m seriously NOT trying to put salt in your wounds here, but your family is probably going to disown you. I come from a Catholic up brining and I recently got a vasectomy. My father pays more attention to my brother who is a real “eff up” than he does me and my wife who have done everything right be the books. We speculate it’s because he has a child and we don’t. As you can probably imagine we’ll be receiving the cold shoulder treatment as soon as he pushes the “Y U NO HAVE KIDS?!” button and I spill the beans. I do have a question though, is there a reason you’re going through the painful process of tubal ligation if you’re not having sexual relations with a man? Having done the research that process is more intrusive and less reliable than a vasectomy not to mention it costs significantly more.

@hey1982 You’re very correct there, misery DOES love company! Family from both sides of our fence have been getting onto my wife and I about kids. At this point it’s finally set in that we’re dead set on NOT having them. My bro in law uses his kids as a crutch and his mother is constantly yelling at them whenever she has to watch them...THEN she attempts to lie by saying they’re so precious and loves them dearly. The last I checked, Christ said “love is slow to anger.” Regardless, we’ve seen and heard enough to confidently choose NOT to have kids of our own. We LOVE kids, but we also love handing them back to their parents once we’ve had our “fill”. ;-)