The Siren Song of Baby Cuteness 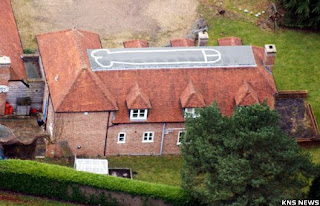 Babies are so cute. Even I think so. I just love to hold a baby and breathe in the soft, wonderful baby smell and press my face against its rose-petal cheeks. It makes me feel all warm and fuzzy inside.

There's a biological reason babies are so cute. Their cuteness has such a powerful appeal that it ensures that humans will continue having babies and our species will continue. The problem is, and the thing most people don't think much about when they yearn to have cute little babies, is that babies quickly grow into teens and they're not so cute - especially when they pull stunts like this.

According to the BBC, an 18-year old in Berkshire, England painted this image on his parents' rooftop and it was there for a year before his parents found out. Nice kid.

Speaking of nice kids, last weekend our next-door neighbors' 17 year old daughter (a Catholic school girl, by the way) was having a big party at their house (the parents were out that night). A huge group of teens were out in the back yard and as the night wore on, and the kids got more and more drunk, they got louder and louder to the point where it started to annoy us. Then, around midnight we heard yelling and a huge fist fight broke out. Then we heard glass shattering and that's when my husband called the police who promptly came out and contacted the parents (our neighbors) who came rushing home to deal with the aftermath.

One of the hooligans broke 2 of their house's windows in the course of the mayhem. The next day, our red-faced neighbor came over to apologize for the disturbance and told us the damages are in excess of $1,000 and they're going to press charges. Then she looked sheepishly at us and said, "aren't you glad you don't have kids?" Um, I think that's obvious.

They have 3 kids - the 17 year old is the youngest. Like most married couples, they heard (and promptly answered) the siren song of baby cuteness early in their marriage. Now the siren they hear belongs to a police cruiser. It's a long way down.

But it's all worth it, right parents?

Posted by Childfreeeee at 2:28 AM

I thought the penis on the roof was funny--a well-executed, harmless prank. Now as to your neighbors' daughter, not so much.

When my husband and I got married and bought our first house, the guy next door asked if we'd be staying there for a while.

Then he told me the house had been a rental (something the sleazy realtor forgot to mention) and the last people moved out after their son stabbed someone on the front lawn! The cops had been at the house on a weekly basis. And sure enough, for the first three months every patrol car that prowled our cul-de-sac would slow down and give our house a hard look. They loosened up when I started waving at them.

I don't think babies are all that cute, but many people do. And I know many people with babies are happy to let another person snuggle them for a few minutes and give them back. But full time, forever? Oh, no. So not worth it.

I think some babies are cute, but not the majority. And they have nothing on kittens and puppies :o)

Definitely all babies are NOT cute. Some are cute but I have seen some BUTT UGLY babies!

Like my friend's baby, which quite unfortunately started life looking like dad, who is not the least bit attractive in my opinion (and that of my good friend also). That was one ugly baby. Luckily I hear she's started looking more like mom.

And I thought the phallus roof design was pretty funny too...

You guys are right...not all babies are cute. In fact, early on in this blog I wrote about a particularly unattractive baby that we came across:
http://childfreedom.blogspot.com/2008/07/et-on-beach.html

Glad some of you find the penis roof funny. If I had a kid that did that, I'd have to kill him!

When we first moved in to our house we were so glad to have a driveway (street parking is tight around here) because the car would be SAFE.

Then one night we heard the alarm going off. I raced outside just in time to see someone running away through back yards, and ducking down -- and a few seconds later getting up to rush into the back door of the house two doors away from ours.

After that, every time a car alarm went off, we joked that "Junior's home."

I used to think babies were cute, but as the years have gone by I've completely lost interest. One baby is as cute/ugly as the next one. I was never, ever into baby dolls. The ones with the "realistic" moving eyes freaked me out and spent the majority of the time in the closet with the door closed.
I'm much more in favor of baby animals. I'm a total creature lover and even find baby RATS cuter than human babies. I guess it's because life experience has made me generally loathe the human race.
Teenagers? Pssht...they pretty much sealed the deal on my never wanting to become a parent. ACK!

Oh, of course the penis roof is funny because it's not our roof!

If I had a kid that did that to my house, I'd probably have to murder him too! ;)

That picture struck a reeeaaalllyy strong chord in me going back to my frat days. On that level it's funny as hell, as in dyslexic internet cat funny.

But I feel for the parents. I know England isn't exactly a cramped country, but a house like that has to go for a pretty pence. And that beautiful home was desecrated. I don't know, if it were my kid, he'd probably be moving through the bowels of my three Corgis before the night was out.

I thought the roof was pretty funny too.
But I have to disagree on the baby-cuteness factor. I've never found babies or children particularly cute. They may occasionally do things that make them seem temporarily cute but otherwise, no.
To be honest, I don't like the baby smell or holding them either...

No babies aren't cute. My late mother always told me, "you'll think different when it's your kid." Not sure I agree. I can walk into a house with an infant and know it. The smell is always there. That diaper and baby powder smell. (Not that I have anything against baby powder. Being a big guy, I use it regularly.)