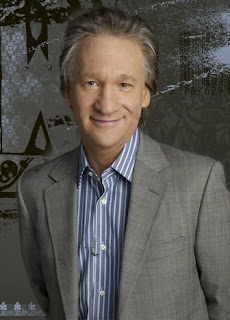 Comedian/actor/writer/producer/political satirist/commentator Bill Maher is not only vocal about being childfree, he dedicated an entire episode of Politcally Incorrect to the discussion of our culture's obsession with children and how the childfree often get the short end of the stick. Here are some quotes from Bill Maher about being childfree. (You can watch the Politically Incorrect episode below).

Don't you think we should stop celebrating spawning? People celebrate spawning! It's not a virtue anymore. There's six billion people. We're not rebuilding after the Flood now. Stop celebrating! Every Mother's Day they give an award to some maniac who shitted out twenty kids or something. This woman shouldn't get an award; she should have her legs tied together and be heavily sedated.

I don't dislike children; I just don't particularly want to be around them a lot. The problem is, neither do their parents. And I'm tired of being constantly, involuntarily deputized into the fight to keep your kids away from adult pleasures. 'It takes a village.' That's just a saying. Us other villagers are busy, okay? I have other things to do in the village.

What happened to telling kids that some things are for children and some things are not? There's hundreds of thousands of non-violent drug users in jail now because that's the front line of defense in keeping drugs out of the hands of children. And it's just not right. It's not fair. You know, this 'Drug War,' we put up with so much shit because of it. I do, personally. There's censorship in television; I can't make a joke about taking drugs on my show. We can talk about taking drugs, but we can't make a joke, because the kiiiiids might be watching. We made it funny - NO! Then they'd wan't to run out, and they'd take drugs, and that could lead to dancing."

"When I was 28 years old and a girl said to me, 'Do you like children?' I'd go, 'Well, you know, not right now, but I think someday.' That was a complete lie. I never liked children. I never wanted children, and I was just saying that because I didn't want to lose the fish that was on the end of my hook."

Want to see what other celebrities are childfree by choice? Check out my list and be sure to let me know if you learn of others so I can be sure to add them!
Posted by Childfreeeee at 1:06 PM

It's interesting that you posted those you tube clips, because I once went to you tube searching for pieces about living a childfree life and this Politically Incorrect show was just about the only thing I could find...when will the media (and adverti$ers) understand that people who live childfree are interested in seeing their issues discussed, interested in supporting programing that speaks from our point of view?

That is awesome! I can't believe I forgot about Bill.

He's pretty funny about it too - and also right!

I too am so sick to death of everything being about the children and having so much of adult life being messed with to protect the children!

Here's an idea, if parents are so concerned with their kids not listening to music with vulgar language, etc. - why don't they try PARENTING and actually PAYING ATTENTION to what their kids are listening to/watching/doing and having a discussion with them and telling them why they don't like "X", why they find it inappropriate and therefore will not let the kids listen to/watch/do?!!

That's just one of the many things one takes on when one decides to have kids. I fully expected to deal with and be responsible for these things if I had ended up with kids. My parents did it so why is it so damned difficult for today's parents? Personally I think these Tipper Gore witch-hunt variety of today's parents are just lazy!

I like Bill Maher -- used to watch Politically Incorrect when it was first on cable.

And speaking of child-centric culture, a few posts ago I left a long comment about the National Wildlife Federation and their child-centric message about 'Nature Week' or whatever it was called.

Today I get something from 'Ranger Rick' and it's all about ... getting kids outdoors! AGAIN!

So I go to the NWF Web site, and guess what their central slogan is?

"Inspiring Americans to protect wildlife for our children's future."

I am off all of their lists now and forevermore. I never heard such a BS reason for conservation in my entire life. So wildlife is only valuable in terms of "our children's future"? GAH! a thousand times GAH!

Unbelieveable, firefly!!! I don't blame you for wanting to get off their lists.

How about this concept: wildlife is valuable to WILDLIFE for its own sake. Does everything have to be about humans, and esp. CHILDREN!???

I sent a comment to the National Wildlife Federation via their web site. Here's what it said:

"Just wanted to make a comment. Wildlife is intrinsically valuable - it's value is not tied to children and I wish you wouldn't use that approach to drill up funds. Things are getting a little out of hand when EVERYTHING is focused on children to the point of absurdity. We should protect wildlife because it deserves to be protected for its own sake, and if people also happen to enjoy it, great. We do not protect wildlife just so that children will have it to enjoy later. I am an adult and enjoy wildlife just as much as kids and guess what? I am the one with the wallet and the money to donate, but I think I'll donate elsewhere."

I'm glad you contacted them. I don't know when they made this change, but I do know that when I first went through their online certification process for backyard habitats that child-centric sentiment was not their slogan.

It's really sad; they used to have some good resources for people wanting to create urban wildlife space, but it's no longer noticeable thanks to the kiddie stuff all over the home page.

Your blog rocks. I had to give up my satellite half-way through university (saving money also rocks) so I've missed the last two-years of Maher. I like him so much better than Colbert, too. Colbert is very intelligent, but I can't stand listening to him. It seems like he has to work to build an insight when Maher does it so naturally. Difference in age and experience between the two?

I've been reading Brit Girl for awhile and can't believe I haven't stumbled across your blog. Keep doing your thing, man, your stuff is quality.

Thanks for the nice comment and welcome to Childfreedom. Glad you are enjoying my blog. YOU rock!

I like Maher better than Colbert too. I don't think I've ever been able to sit through an entire show of Colbert...he just annoys me. But Maher...that's another story.

Yea, Colbert bugs me. I love John Stewart! I love Maher, too. Religilous is awesome! I saw this clip the same way Miss Mo did. Just browsing 'childfree' everywhere I could.
And the preserving Wildlife for the kiddies annoys the hell out of me as well. Fuck the damn kids! Humans are taking over the world! AAAAAA!!!! Okay, I'm done... :P

Love Bill! We have many similar views--how could I not love him? =)

No way! What's wrong with you for posting this? This does not further our childfree mentality, it makes us sound completely psycho! Maher is a total woman hater. Sometimes he backs our issues, but at the root he truly dislikes women. And I have no idea how this horrendous little nugget has gone unnoticed:

"Every Mother's Day they give an award to some maniac who shitted out twenty kids or something. This woman shouldn't get an award; she should have her legs tied together and be heavily sedated."

I work in mental heath and that quote is scary! Sounds like a patient. One that could only have male doctors and nurses attend to him (because of the violent acts he wants/has done to females) Nazis tied women's legs closed too. No one is horrified by this? Don't you like yourselves? Do you hate women?