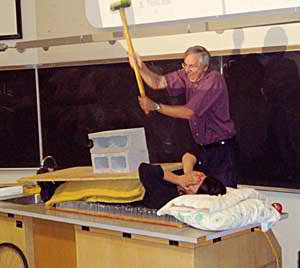 Do you remember my employee Charlene? I wrote about her a few months ago. She was the new hire who replied, "NO!" to the question of whether she had kids and then backpedaled quickly after that stating, "maybe when I get married, but not now."

Well, surprise of all surprises, she's now pregnant and not married. I found out a month or so ago. She's in her third month and sick as a dog. Almost every day she looks completely miserable. Yesterday, she came into my office looking not only miserable but on the verge of breaking into tears. I asked her how she is doing. "Not good" and her eyes began to well up. I invited her to close the door and sit down so we could talk.

She is completely overwhelmed with being pregnant. She is nauseous every day and nothing helps. She is having anxiety attacks and is sick with worry over being a mom, given the fact that she is unmarried and lives with her mother and grandmother. She is stressed about not being a good employee (because she's had to leave early frequently due to being so sick) and worried about my perception of her. I told her not to stress out as far as work is concerned - that we all have a generous bank of sick time to use. I was being extra compassionate because I truly feel sorry for this young woman. She has made a rough bed to lie in and it's clear she's having regrets.

Now of course I am now dealing with yet another scenario where I am going to have to find a replacement for an employee on maternity leave. It got me to thinking that perhaps I should stick to hiring men from now on, since it's pretty safe to assume I won't have to deal with these kinds of issues with them...

WHICH got me thinking about the glass ceiling and the reason women are paid less than men. I suspect it has less to do with general gender bias as it has to do with the fact that women are not as reliable as employees because most of them become moms and desert their jobs - or at the minimum become distracted and less invested in their jobs once they have kids. Many women leave the workforce altogether to raise kids and interrupt the progression of their careers and then return to find they are not making as much money as their male counterparts who have reliably remained on the job.

Later yesterday afternoon I was meeting with another director and filled her in on the situation with Charlene. At the end of the discussion I said, "God bless her" (in other words - glad it's not me) and the other director said, "Yeah. Better her than me". Hm, is there another childfree-by-choice person in the office that I didn't know about? I must investigate.
Posted by Childfreeeee at 4:48 AM

After Charlene gives birth, her misery will change from internal to external. And that will last a lot longer than 9 months.

And you will end up having to train a new employee or deal with a less productive and less happy Charlene.

Looks like a lose-lose proposition all around, moreso for Charlene than for you.

I know that in our lab, many of the women I work with are moms and they CHOOSE to work part-time or 30 hrs/wk so that they can have more time to be with their kids. They get paid the same as any male lab tech, but they are the ones choosing the reduced hours for the sake of their families. IMHO, that's part of the reason that most women make less money than men do, even when they have the same job description. It irritates me that women that I work with seem to constantly be getting pregnant and leaving the rest of us with most of the workload.

It's like you are in my brain! I have this conversation all of the time with my female friends (or the ones I have left anyway).

I think it's irresponsible to be a mother and a full-time employee. I seriously think that mothers in the work place give us childree women a bad name, especially single mothers. They are the worst employees.

Another facet of the glass ceiling is that many of those women who are childfree still suffer because of their employers' assumptions that they will someday have children and become unreliable employees. Not because of anything we have done, but because of what they think we MIGHT someday do.

Absolutely, women have created this situation for all of us, including the cf. But you can't say that, or everyone will hate you.

I'm currently friends with a woman who had a baby in miserable conditions. What do I say? I am getting so effing sick of hearing about how awful her life is now, and how she had no warning that this would happen whatsoever. I'm tellin' you, Mandy, I am running out of nice things to say to people who choose this. Maybe I should just tell them I'm praying for them, and change the subject. That seems to work for everyone else.

I hate to be a fairweather friend, but when the weather is always terrible, it makes you want to move somewhere else.

I've known single mothers who are full time employees and they are good at their jobs, so not all single mother workers are bad. Also, I do get upset when I hear male colleagues complain that it's not fair that women get paid as much as them when they get maternity leave. Then perhaps we should let dads take the time off too so it’s fair that way instead of cutting women’s pay since not all women are mothers.

The 9-5 office job structure is not friendly to anyone who has care-giving responsibilities. On top of that, society still expects the female parent to do most of the work of child-rearing. This is purely anecdotal, but of my co-workers who recently had children, in all cases the parent who went back to work part-time was the mother, never the father. As long as women keep agreeing to do that, we'll never achieve workplace equality. Dads must be made to do their share. Unless a large number of MEN are affected, the workplace structure is not going to change -- sad, but true.

Where I work the office administrator got pregnant & took her year of mat leave, during which her replacement didn't really do a very good job. The admin came back and within a year was pregnant again. We still haven't recovered from her first absence, and now she's off on leave again! But you can't say anything...

We had a man take parental leave a few years ago. His wife is in sports medicine, I think, and works for herself so it made more sense for him to take the time off. I thought it was a great thing for him to do but you should have heard what the other men said about him!

I'm reminded of my 40-year-old co-worker who could not be more excited to become a grandmother because her 16-year-old daughter is knocked up to some boy who wants nothing to do with her anymore.

All I can think of us what a drain some of these situations are on society AND on us, whose taxes will be going to support public assistance programs, medical assistance, food stamps, etc. That's not always the case but it's hard to avoid when you're a young single parent with a child you didn't plan for.

Why can't people in such situations consider alternatives?

Also, you're so correct in pointing out the reason for the salary gap between the genders. I work in HR and have been saying this for years! Moms don't want to admit it, but when you choose a different career path (i.e. the mommy track), you can't expect your salary to remain the same as those who continue to work full-time, take on the extra projects, work overtime, don't leave the workforce for a number of years, put themselves in a postion to be promoted, etc. For example, there have been a number of articles about female attorneys who CHOOSE not to try to make partner because they want to focus on mothering.

I have worked with some women who were AMAZINGLY good at juggling parenthood and work and never left their responsibilities for others - if they had to miss time at work for a sick kid or something, they were there late at night or on the weekend to make up for it. And I've actually never worked with anyone who used kids as an excuse to slack off. But I have worked with women who think they should be promoted just as quickly as a man in the same role, even though they are only working part time and the man is working full time. Sorry, but in my field you are learning and progressing every day, and working 3 days/week just does not get you the same expertise at the same rate as working 5 days (or more)/week.

I just wanted to comment on that last part of your story...once in a while (very rarely) I meet someone in the office who I think may be chidfree by choice like me and I get so happy thinking, could it REALLY be someone like me? A freak like me? And EVERY time, I swear, they take the mommy path within a year or so of my potential discovery. I'm still the only one I know at my office of several hundred people, at least half of whom are women...it would be cool if, in your case, there actually IS another one out there!

Oh, this story makes me sad.

I just have to comment on the "it's not general gender bias" thing. Well, IT IS. Because women may carry the babies in their wombs but the babies are not only their responsibility. They are also the father's. It IS gender discrimination if a society works in such a way that because I have a working womb I dont get a job because people assume I'll be unreliable.

If our society worked in such a way that I could be reliable despite having a womb because the responsibility of a child is shared and BOTH PARENTS would alternate with the maternity leave, then women wouldnt get paid less or employed less due to "unreliability".

Of course I have no clue what option you have as an employer. I just wanted to point out that it's still gender bias and gender discrimination and that we still have work to do (as a society).