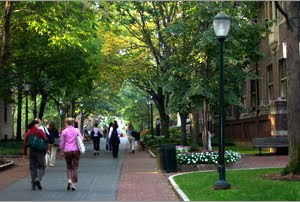 It was obvious that they were just having fun and trying to shock people into laughing at their silliness, but when I walked by, I gave them a thumbs up and smiled at them. Then, a few minutes later, as I walked by them again, I stopped and decided to have some fun with them. I told them (with a serious face) that I was really interested in their cause and asked them about the mission of their organization. The young man I spoke to first kinda giggled (because obviously there is no organization or mission and they're just there to shock people) so after he floundered a little bit, another young man (who was really intent on making this seem like a serious protest), jumped in with a full anti-baby speech (loud enough for those passing by to hear). I told them I was in full support of their cause and rattled off my own list of anti-baby propaganda (focusing on the media, and environmental issues). I could tell within a minute that the fact that someone was taking them seriously (a middle-aged woman no less) was upsetting their apple cart a little bit. They weren't shocking me at all. In fact, I think I was shocking them a little.
Anyway, I guess it says something about me that these are the kinds of things I like to do for fun.
Back at the office after lunch, one of my staff members came into say hello and shoot the breeze. We got to talking about our husbands and she asked me how hubby and I met so I gave her the full story of how I was shopping in a music store and was wearing my guitar pendant and he was wearing a drum cymbal pendant and we commented on each other's necklaces and it was destiny! I happened to have some old photos handy in an on-line album, so I showed them to her - photos of hubby and me when we met (when both of us had big hair), dancing at a blues bar, camping at our favorite state park, photos of us dressed up in sombreros at a Mexican party, etc. The more I talked about hubby, the more my eyes must have been twinkling because she turned to me and said:
I can see why you decided not to have kids. You have everything you need already.
It's so cool when a parent gets the choice to be childfree. It's not that I need the acceptance or understanding, but it just feels so gratifying to be perceived as smart and fortunate for being childfree, instead of as a pitiable, misguided fool (which seems to be how most parents perceive us).
Anyway, this got me thinking about my marriage to hubby and I wondered whether I would still have the same twinkle in my eyes if we were saddled with kids, struggling to make ends meet, arguing over housework and childrearing issues and collapsing into bed exhausted every night. I doubt it. There's enough strain and responsibility in life to rally against without kids, but as a united and undiluted twosome, we somehow manage to stay above the fray.
Posted by Childfreeeee at 11:58 AM

Love, love, love this post! Spot on, and cheery while you were at it!

Awesome! I like the quote that the woman made regarding you and your husband. I think it's very much the same thing with my husband and I...we have everything we want already; we don't need kids. I think we'd have a lot more struggle in our relationship if we had to worry about money or who has to do the housework, etc. Good post!

I love this post, very cute that you turned the tables on those boys!