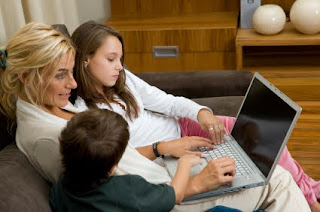 Have you witnessed this phenomenon? A parent will post a status update such as:

"...is so proud of Brittany for making the honor roll!"

And then, after the parent's boastful update, all of the parent's Facebook friends come out of the woodwork to outdo each other:

Comment #1: "Congrats! John made honor roll three times so far and we think he's going to be admitted to Harvard in the fall."

Comment #2: "Wait'll she makes National Honor Society. When Chelsea was inducted, that was the proudest moment of our lives."

Comment #4: "My son is in the gifted program at St. Bart's. "
And on and on it goes, each parent more interested in bragging about their own kid and hoping that their kid's achievements will make them look like big success stories, than in congratulating the person posting the update. I don't know what is sadder - the fact that people are so self-absorbed and conceited, or the fact that they have no life of their own and must live vicariously through their kids.

Posted by Childfreeeee at 6:36 AM

I haven't visited good 'ol Fakebook in a while again. I really need to do some cleaing up over there, as I added way too many people when I was into the games. I've had to stop playing them because they've gotten so complicated and I just plain don't have the time. I can't justify spending THAT much time on the silly things. STOP SENDING ME FARMVILLE SHIT. And it's mostly the SAHM's too.
Many of these people that I barely know have been hidden due to either having a baby as a profile pic (can't STAND that) or constantly babbling about their kids. Yes, I have seen the oneupmanship and it is horribly annoying. I really can't stand what Fakebook has become. Why are people so OBSESSED with this crap?!
Anyway, thanks for doing such a wonderful job on this blog, I enjoy it so much! Take care...

oh yes, STFU Parents chronicles many occurrences of "mommyjacking" (yes, I realize that males can do it too, I didn't coin the word). You'd be amazed by the weirdness. Worst, to me is when people mommyjack a completely non-kid-related topic. The first time a friend of mine does that, they're gone.

I recently had to hide an old friend because not only was her daughter her profile pic (yech!), but she would NOT STOP POSTING about Emily's potty training. I know every last detail now, and I've seen all the pictures to prove it. The last straw for me was a post of "Emily on her throne." Done.

That utterly amazes me. No one has ever done that to one of my life achievement posts.

As a childfreelifer, I post about things like new jobs, art events, etc. People are generally happy for me, no need to one up me in the posts.

What I hate even more than one up man ship, is one down man ship when someone has an illness.

Imagine this: I am at home today with baby xyz, she has the flu and I had to take her to the hospital last night!

Mommy one: Well at least it wasn't the Norod virus. Baby ABC had it and she was in bed for weeks.

Mommy two: Johnny has the measles, I am pretty scared.

etc. etc. I hate that stuff.

EY beat me to it, but I was also going to point you in the direction of STFU Parents. So funny. The current placenta post is pretty nasty, but in general it's funny.

Sorry parents, but the whole world just doesn't need to know everything about your kid. Sure I'd love to hear that your kid started walking, but I don't need to know that his poop contains whole corn kernals. I just don't.

It's also annoying when they try to outdo each others' parenting woes. I don't really want to read about who's kid threw up more during the middle of the night.

I think the funniest thing I saw was when my friends mom posted on his wall "I'm so proud of you for donating a third of your paycheque to Haiti!" They live together, could she not have told him in person? lol It's kind of the same thing, only she didn't want to seem like she was bragging, she just wanted to let everybody know how awesome her son is!

I don't mind when people say their kid's on the honor roll (I'm a teacher after all). But I do get annoyed when parents try to one-up each other, as you said. It seems like they're all competing. Just celebrate the accomplishment of your friend's kid. It's not the appropo time to brag about yours.

It's not so bad when they post their proud moments on facebook...i Just hate it when people fish for compliments on their kids.. my friend's 3 year old crossed her fingers and she was like "look at that! she's so above average!! have you seen a 3 year old do that?".. frankly it wasn't that great.. i didn't want to lie and say that it was amazing.. but i couldn't say the truth either.. so it was just awkward... i know that moms feel this great LOVE towards their children but it will be nice if they keep it to themselves or keep it in check.. "love is blind" doesn't only apply to man/woman relationship. i think it applies to parents as well

Oh, the bane of people BIRGing (basking in reflected glory). Luckily, I've not yet seen such nonsense on Fb but forewarned...

Fortunately for me, my friends on Facbebook that have children lead interestingly enough lives that I don't have to read about their children all the time.

Hi Childfreeeee! Firstly, greetings from Sweden from a happily childfree guy (yep, the phenomenon IS global) in an equally happily childfree relationship since 5 years. Secondly, endless thanks for this blog! It's much needed and sums up (and outdoes) my thinking and reasoning on the subject to an absoulte tee.

Yep, those kiddie-related FB stats are a pain - one of my overseas friends happily posted comments on how her infant son smeared the wallpaper with poo...

I have SO many other issues on childfreedom, but I'll make sure to do a lot of backtracking on your posting history, as not to repeat stuff you've covered before.

Whenever I see my friends comments on facebook, I really have to work hard on stopping myself typing how I feel.
One woman was complaining because she had paid £60 for her son a Man Utd kit for his birthday and saying it was a rip-off. On this occasion, I had to reply.
"Well, can't you just not buy it? Say 'No'"?
Needless to say, my post was ignored.

My mom's best friend from the old neighborhood did this. When I graduated from an expensive private university through my own efforts in both study and money, her friend started claiming that HER daughter was also admitted to that university but chose to go somewhere else.

Except she'd never heard of that university until I started going there.

And when my uncle found out my brother was in some gifted split/class at school, suddenly both his own kids were in special gifted programs. Except they weren't--he only thought to tell us once it came out that my brother was in one, and he is the type to pimp his kids' inherent superiority nonstop so there is no way he just 'remembered' at that point.

And my male cousin was such an ugly, unresponsive little spud of a baby it is kind of hard to think of him as anything else, much less 'exceptionally brilliant'.

Fact is, we dont' brag about such things, and even if most of these people aren't self-aggrandizing liars, there is nothing particularly special about some of that. I was never in a 'special' smart class, but the fact is I was in a Catholic school where everyone was held to a certain educational standard (outside of anything scientific that might draw from their religious dogma too much of course) wherein kids who were not being challenged got skipped ahead a grade, and the only 'special' classes were in this van at the end of the playground, where the 'van' kids went who couldn't keep up with the high educational standards.

Remember Futurama? "By 30th century standards, you're not a college dropout, your just a high-school dropout". To excel in today's public school classes is a joke. I fell behind in eighth grade in Catholic school and was in the slower of two partitions of the grade, but I was a year ahead of the smart ninth graders in the public school I attended the very next year.

So the slow classes in the worst Catholic school in Cleveland were a year ahead of the college-bound classes in a public school.

I take such parental claims with a grain of salt anyway, but even when true they don't mean a whole hell of a lot to me, knowing how poor the standards have become.