Woman, thy Role is Mother (first and foremost) 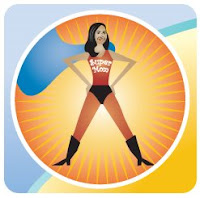 Did you ever notice that if anything unusual or special happens to a woman who happens to be a mother, the fact of her being a mother is always pointed out? It doesn't matter at all whether her being a mother is relevant. Just watch the news. If a woman is arrested, the story is "Mom Arrested for Robbery". If a female politician takes the stage to make a big speech, invariably she mentions that she is a mother within the first 2 sentences of the speech. When a woman is being given an award - even if the award has nothing at all to do with childrearing or motherhood - her role as mother will be pointed out right away: "And the Nobel Prize for Advances in Nuclear Physics goes to Mary Jones - world class scientist and MOTHER OF THREE!" When John McCain picked his female, gun-toting, animal-slaying, mooseburger-eating, "feminist"-against-womens'-rights running mate last week, we heard ad nauseum about her being a mother of 5 (one with down's syndrome, God bless her!) and a "soccer mom", as though this critical, must-know information would push us off the fence and send us racing to the voting booth to keep those wonderful Republicans in office. When Dara Torres won the silver medal in the Olympics a couple weeks ago at age 41, the fact that she is a mother was mentioned almost as frequently as the fact that she was age 41 and winning an Olympic medal.

Here is my question. How the fuck is being a mother relevant to any of this? A woman is arrested. Aside from being a mother, this woman is also likely many other things - a wife, a daughter, a sister, a friend, an employee, a niece, a granddaughter and the list goes on and on - everyone in her life will be negatively impacted by her arrest. Mother is not her only role. When a man is arrested we never see a similar headline, "Dad is Arrested for Robbery". When a male athlete wins a medal at the Olympics, all we hear about is how well he competed - no mention of how many rugrats he has at home or that he is a "daddy of three". When a male politician is chosen as a political running mate, nobody is talking about how many of his kids are retarded or how many kids he is cheuffering in his mini-van to soccer games.
No, the simple fact is - nobody gives a shit if a man is a dad but we simply MUST know if a woman is a mother.
And why? Because our culture defines womanhood as motherhood. Woman = Mother. The terms are interchangable and the link is continually reinforced. A woman is a mother first and maybe some other things on the side. The message is continually pounded into a woman's head that motherhood is the most important thing she does, the most rewarding part of her life and we must constantly be reassured of this if we are to accept a woman in any other role.

Motherhood is not only equated with womanhood, it is also equated with success and goodness. That's why women like Dara Torres, Hillary Clinton, McCain's Republinazi running mate and every other uber high-profile woman out there wear their motherhood badge of honor like a Wonder Woman costume - and it's also the reason the news media salivates over mothers who are arrested or have other embarrassing scandals befall them. The contrast between the entrenched idea of woman=mother=goodness and the reality of woman=mother=mug shot jailbird may shatter our idea of mother as angelic superwoman momentarily, but it sure makes for some irresistable must-see t.v.!

Posted by Childfreeeee at 3:17 PM

I wonder if we'll ever be accepted in mainstream society.

Not sure I really care though.

Keep blogging about the tough stuff--love reading it!

Isn't that the bloody truth?! I have a Master of Science in Biology and it shouldn't have any bearing on whether my reproductive organs work or not. Perhaps I ought to write to the major networks and ask why they don't include men in this bunch of rubbish. They'd probably turn it into a story on how I'm must be a baby-hating, ball-busting, fem-nazi. Misogyny is a alive and well. *Sigh* Good post!

Great post! You see this sooo many times in the media.

I was getting so sick of Sarah Palin's speech...I really don't care about your kids, lady! I want to know how you plan to run the country if and when McCain is unable to do so.

wow, it's amazing how it can infiltrate your brain without you realising! You're right about it being drummed into women all the time. I'm so glad I read your blog, that was a wake up call for me I must say.... :-)

I am not a mother.

But I am a MUTHA.

I am also extremely irritated by people like Sarah Palin who use the hard-won gains made by feminists to turn around and try to keep other women under a patriarchal thumb.

If she REALLY believes that BS why isn't she at home baking cookies and doing laundry?!