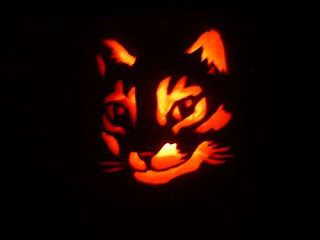 To all my readers - Happy Halloween! I hope you are going to do something fun to celebrate today. Halloween is one of my favorite holidays - always has been. I love the mood, the chill in the air, the atmosphere, the creepiness, the costumes, and of course - the candy. I may not go trick-or-treating anymore, but I always make sure I get as much candy for myself as I do for the kids going door to door.

Speaking of kids going door to door, it seems to me they are not as polite as they used to be. In fact, over the years it has gotten so bad that hubby refuses to hand out candy anymore and requests that I do the same. Many kids do not say thank you and some do not even bother to say "trick-or-treat".
One Halloween, much to the shock of my friend Sara who was hanging out with me handing out candy, I flat out refused to give candy to a trick or treater. Here's what happened:
He was a teenaged boy who showed up at our doorstep wearing no costume. Nothing. I opened the door and he stood there, costumeless, with a pillow case which he opened and shoved toward me. He didn't say a word. I asked, "Can I help you?" He gave me a dirty look, waited for a moment and then let out an annoyed sigh....... "trick or treat". The disgust in his voice was palpable, like lady, you are really wasting my time. "Aren't you forgetting something?", I asked. He looked back at me blankly, completely perplexed as to what he had forgotten. He had no idea what I was asking him. "Where's your costume?" He replied smartly that he was dressed as himself to which I advised him to come back wearing a costume and I would give him candy.
Sara's mouth dropped open in shock. She couldn't believe I refused to hand out candy to this boy, but it was a moment of clarity for me. People cannot be entitled assholes unless others enable them by rewarding their ill behavior, and I decided that night that the buck stopped at my doorstep.
Luckily, the boy and his friends didn't return to our house later that night with a carton of eggs (I half expected it), but I will say that hubby was beaming with pride when he heard how I stood my ground.
Trick or treat.
Posted by Childfreeeee at 2:15 AM

Bravo! For standing up to that little stinker.

I stopped giving out candy years ago. When I was still in grad school and lived at home, my Mom would still hand out candy, but I simply refused for much the same reason as you refused to give that boy candy.

Also, I just don't see the point of handing out free candy. If kids want candy so bad: their parents can buy it for them! Yes. I'm a little grouchy when it comes to parting with my candy. LOL!

I just think it's different when you have a party and people come over versus kids (and most annoyingly parents with newborns! Because you know the parents are eating all that free candy) coming to one's doorstep and asking for free candy. I just think it's weird.

I'm not familiar with the history of Trick or Treating, so I'm not sure when it became acceptable to hand out candy instead of healthier options. Considering the high rates of childhood obesity and how much junk food parents allow their children to consume, I just don't think that handing them loads of candy is the best plan of action.

Of course even if you were to give them granola bars or fruit, it would get tossed in the garbage (or perhaps on your lawn!). I have heard about people finding razor blades and such hidden inside home made treats so I guess parents have been advised to only allow their children to consume prepackaged food from a manufacturer. Making it all the easier to avoid healthy home made treats, because let's face it: a lot of supposedly "healthy" food products are full of unhealthy substances. Soy being a big one: can we say phytoestrogens? Yeah, not the best thing to be putting into prepubescent children!

LOL! My background is in endocrinology so I'm super paranoid about substances that have hormone-like activity in the body. :)

I am so impressed that you stood up to that little teenage punk. I'd be willing to bet he acquired that sense of entitlement from his parents...sad.

Good for you! First of all, I say teenagers are too old to be trick or treating anyway, even with a costume. But I remember that it was fun and I'm sure I went out in the first few of my teen years too. So I would say that if they are really in the spirit and have a costume (one they obviously put thought into) I would still give them candy. I too have had costume-less teenagers show up at my door and more people should do what you did.

The worst part is, when it's little stuff, parents think it doesn't matter. So what? Little Timmy didn't say "thanks." It has to start somewhere.

we had a couple teenagers with no costumes and my husband hassled them a little but we still gave them candy. The one that annoyed me tonight was a kid who asked for extra candy for her mom. WTF?

When in the world did it become acceptable for over-grown teenagers to go around begging for candy on Halloween? I might have backslapped that boy and just took my chances with he and his friends coming back for revenge. The nerve. . .

Yes, the reason people no longer hand out home made stuff is because of a rumor about people poisoning it or putting razor blades in it. But it never happened, anywhere. The only thing remotely close is a kid that was poisoned with candy on Halloween by his OWN parents. Heh. I even read a research piece recently that actually said Halloween is one of the safest days of the year looking at murder/robbery rates.


Aaaanyway...I didn't have a single kid come to my door, but I live in an apartment. Good thing though, since I had no candy. I reasoned I would give them some quarters if they showed hehe.

Good job for telling that kid to get lost! What a little jerk! I had someone turn me down my last Halloween going out (I was 11 and my best friend and I had her younger cousins with us too) and I WAS dressed up. I was so hurt, the lady was so, so mean to us! I did look older than I was but still. Mean old crotchity...

Your posts have been so negative lately. Why not do a post about how childfreedom enables many folks to commit more time to volunteering and more money to charitable causes? I'd be happy to share my own experiences in this regard.

I think if someone wants to put on a costume and have some fun trick-or-treating, they should be able to, no matter how old they are. If they're adding to the fun and spirit of Halloween, why not? I don't like people denying me fun because it's "only for children".

Me too, Bravewolf! I trick-or-treated until I was about nineteen or twenty, because I loved it! Of course, I always wore a costume and always said "trick or treat!" (without an attitude, BTW) and "thank you!" Sure, at some point perhaps you're too old (I wouldn't do it now, at 31, for example), but this idea that once you hit thirteen, you're "too old" for almost everything is a joke.

That said, I remember going trick-or-treating at nineteen and seeing this one teen girl (possibly younger than me) acting this same way--no costume, pillowcase rudely thrust out in silence, only this entitled creature also had a lit cigarette in her hand. She was also disgusted when one woman actually asked her to say "trick or treat" before she would give her anything.

Another bit of Halloween protocol that gets me is the idea that everyone must give out candy on Halloween--like that Trick-or-Treat movie where the kids are begging for candy at a house with no lights on and the old man who lived there was depicted as horrible for driving them off. In my day, it was understood that no one owed it to you to give out candy, and if they were giving out candy they turned on their porch lights. If the porch lights were off, you leave them be. Conversely, if you want to leave on your porch lights on Halloween, don't get pissed when the little beggars knock on your door!

I am of the same mindset as Harvey. I have no problem with teens trick-or-treating, as long as they are in costume and say "Trick or Treat" and "thank you". Hell, my friends and I once went trick or treating when we were well into our 20s just for fun!

I couldn't imagine going trick-or-treating as a teenager, let alone without a costume! I think by the time people hit their teens there are other fun things to do on Halloween. Additionally, when I was a kid, my mother taught me to thank everyone for the free candy.

As an adult, I love Halloween. My husband and I always host a party for our friends. We have a lot of good food, play dress up, and watch scary movies. Yes, we also have candy to snack on during the movies.

You're not alone. I'm definitely noticing a trend of kids getting ruder. I make them say "trick or treat" before giving them candy, too. If it's a tradition to give them candy, it is equally a tradition to have them have to say the magic phrase!

I love this blog! Have you seen this?

I love Halloween, and giving out candy to all the adorable costumed children. One day I hope to own my home so I can celebrate the holiday properly. But I can't fucking stand teenagers who show up at houses with no costumes. I trick or treated until I was about twenty (being petite and flat-chested helped the illusion) but I wore costumes I worked hard on, and was incredibly polite.

I might be a bit too afraid to say "no" to douchey teens, so I've planned to instead have a bowl of "naughty candy". It will be goody bags of really crappy candy and other terrible things, maybe pamphlets I get from the local OBGYN. It's passive aggressive, I know.