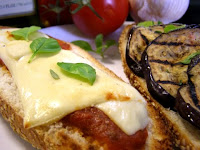 Today I thought I would share with you one of the many little day-to-day examples of how people with kids are catered to like kings and queens, while childfree and childless people are given the shaft.

Exhibit A:
Hubby and me are at a casual pizza/Italian restaurant. I am dying for my favorite - an eggplant parmesan sandwich. I notice that they do not have this item on the menu, however, they do have an eggplant parmesan dinner which is basically the same thing, but on a plate with a side of spaghetti, instead of on a roll.
The waitress comes to the table to take our order. I ask her if the cook will make me an eggplant parmesan sandwich, pointing out that while it's not on the menu, they do have eggplant parmesan as a platter so it would be easy to make it into a sandwich. She quickly replies, "Oh, no. Sorry but they will not do subsitutions or special orders of any kind - only exactly what's on the menu." She rolls her eyes, suggesting that she disagrees with the policy, but they are Nazis about it.
Okay, so I am disappointed but if that's their policy, I'll just get something else. So I order a couple slices of pizza and some onion rings.
A short while later, as I am eating my pizza, I overhear our waitress talking with the people 2 tables down. It is a couple with a baby (who looks to be about a year old). The man is asking the waitress for a special meal, presumably for the baby - something soft and relatively flavorless. The waitress doesn't have any suggestions as there is nothing on the menu like that, so the customer starts giving her directions, "okay, listen - this is what I want. Ask the cook to give me some pasta - plain - no sauce and put some chicken on the top, cut up in small pieces." So at this point I am waiting to hear her tell the guy she's sorry but no special orders or substitutions are allowed. Nope. She is listening intently. He continues: "do you have any vegetables you can also serve with it?" The waitress shakes her head no. "You have tomatoes, right?...Have them also put some tomatoes on it and make sure they are chopped up small too."
She nods obediently as she writes all this down and trots off to the kitchen with their special order.
So I look at hubby and say, "another story for the blog."
I debated whether to say something to her about it. I came this.close to confronting her, but we were out on a date night and I was in a great mood. I did not want to spoil my mood with a confrontation. So I decided to handle it this way. I gave her a very small tip and next to the tip I drew an arrow indicating to turn the check over. On the back of the check I wrote a note explaining that the tip was low because she told me "no substitutions or special orders" but readily took one from the customers 2 tables from us.
Obviously the line about the restaurant having a "no substitutions or special orders" policy was a crock of horse doo, since if there was such a policy, she wouldn't have so readily accommodated the other table with their special order. The fact is, she just didn't feel like making an extra trip to the kitchen for me. I wasn't worth the trouble, but our neighbors 2 tables down were. And why? Why else. They have a baby. Roll out the red carpet.
(I swear, stuff like this gives me worse indigestion than a greasy eggplant parm sandwich).
Posted by Childfreeeee at 5:53 PM

I've been reading for a while, first-time commenter. But I just had to comment on this post.

I used to be a restaurant cook. Guess whose *special order* request I'd have been happier to accommodate; yours or that of the family?

I've often had to be dictated by parents like this about how exactly to prepare a dish that was not on the menu, one that they *invented*. The problem with this is that nine times out of ten, it gets sent back because it was not to lil Bratley's liking.

However, it would have been very easy for me to make your eggplant parm sandwich, and there'd be no bitching and moaning about it. You'd be happy to have gotten what you wanted, and the server would have gotten a much better tip.

In my experience, the more annoying a family is in a restaurant, the more demanding and messy they are, the lower the tip.

I think you did the right thing with the lower tip and the note. I did this once when hubby and I went out to lunch at this restaurant in a resort town in Maine. Everything was fine until a family with a baby was seated near us. The waitress started going all goo-goo over the baby, and ignored us for the rest of the time we were there. And I sure needed the second beer that I never got, because the baby was loud and annoying.

Waitress got 10% and a note as to why, and we never returned to that place.

Sorry to hear you've had similar experiences as what we had - it's interesting that you handled it the same way we did. It's never surprising...it's just disappointing, and very telling about our culture. But it does give me lots to write about!

You handled that well!

So you were asking for an extremely simple substitution....basically putting the eggplant on a bun as opposed to on a plate with a side. How hard is that.

The parent, on the other hand, basically made up the entire meal. I wonder how much of it the kid actually ate.

I will not hesitate in giving a crap tip for bad service no matter what the reason. If we are waiting a while for the server but the place is pretty packed and s/he is struggling to handle all the tables, that's pretty much my one exception. I'd be frazzled too, and it's not his/her fault the place is so busy or the host/ess seated us in the section that's already packed.
HOWEVER, if it's pretty obvious that we're being ignored in favor of another table and/or the person apparently has a stick up their ass for some unknown reason (it's happened before), they can pretty much kiss their 15% tip goodbye, much less a 20% one!
I need to get better about noting why the tip is so low though. That is an excellent way to handle it!

Good for you leaving a note with the smaller tip. The waitress deserved to get a small tip for that. Some might have not even given a tip. I've never heard of a restaurant having rules against cooking food the way you want it. It's one of the rules of customer service!

That is ridiculous. (the service ,not you ;))
I would not have tipped well either and usually I tip VERY well.
I like the idea of leaving the note. At least the waitress will know the error of her ways and can maybe make an effort not to be biased next time.

I don't know why anyone would take a baby to a pizza/Italian joint anyway. Sounds messy.

Good for you for leaving that message! In fact, that explanation would've been her "tip", LOL. I also seem to get bad service a lot in general when dining out, maybe because I don't order alcohol or appetizers?

You handled that great, much better than I would have. I probably would have embarrassed my poor hubby by LOUDLY commenting on how THEY got special treatment because of the bayybeee and I didn't! Whine whine whine! Hehehe...
I love how you wrote her a note on the back in addition to the small tip. Very nice touch.

My partner and I eat out almost every night. I routinely get special orders from "no substitutes or special orders" restaurants because I'm a vegan. It's either go out of your way to not add the chicken, or I eat somewhere else. The waitress was assuming you were someone who would just order something else, and while it's very rude of her to do so, you...well, you did. Parents tend to make a big fuss, hence the "better" service; but I assure you, she liked you much better! Well, until the she saw your note.

Also, writing it ON the check is the only way to do this, that is what we did. All of those checks have to be turned in at the end of the shift to the boss, so it (and the note) cannot be thrown away, as it would be if it were written on a separate piece of paper.

If the boss is smart, s/he will see this and take some kind of action against this crappy server. No manager wants servers who drive away customers, especially now that we're in a recession.

I love your blog ... thanks for writing. This story does indeed give me indigestion, especially since you wanted something so simple. If those other people were so picky on their custom meal they should have stayed at home and made it themselves. I'm sure half of the custom meal ended up on the floor, too! Argh.

Thanks for all your comments, everyone and welcome to the new posters!

What I REALLY wanted to do was confront the waitress directly and ask her why she was more than willing to give the family with the baby a made-to-order meal when she told me it is not allowed. But like I said, I didn't want to get myself all riled up on a night that was so pleasant up to that point.

What would have been funny to do - but a little too mean for me - is to leave no tip and then write on the back of the check:
"Here's your tip: treat all customers equally".

Sorry, I guess I'm going on an archive-commenting-spree...

I think the biggest guilty party here is the PARENTS. You can't just take a baby any ol' place and expect to be accomodated. If I were a parent, I wouldn't DREAM of taking my child to any place that didn't cater specifically to children. I think parents are often too selfish to recognize the fact that their lives have changed and they can't just do what they want anymore. Fancy restaurants shouldn't be expected to cater to children. That's what IHOP's for. Oh, you don't WANT to go to IHOP? Too. Fucking. Bad. You have a kid now, get used to it.

Honestly, sometimes I think that I'm too selfLESS to have a kid. Or at least I just know what I'd be in for better than most people. I am not a "have my cake and eat it, too" type of gal. When I make a choice, I make ALL the necessary sacrifices for that choice. If I had a kid, you would NEVER see me inside a restaurant like the one you were in. I would see it as being inconsiderate to the restaurant. If I ever DID go to a place like that, I'd hire a sitter, and if I saw the same family you saw there, I would judge them just as harshly as I'm judging them now.