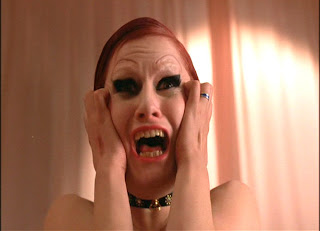 The other night, one of my closest friends took me out to dinner to celebrate my birthday. We went to a wonderful Thai restaurant near my house and had a lovely evening chit chatting away and catching up on all the latest. My girlfriend, who is a mother of young children, was just thrilled to be able to sit still at a table and actually eat her dinner. Recently, she's lost a significant amount of weight to the point that we've all become concerned about her (she's starting to look malnourished) and we know she is not eating disordered. She tells me she's been to the doctor and gotten a checkup and full bloodwork done and she has come to the conclusion that it's simply a matter of never sitting still because she's always chasing after the kids, and also...that she doesn't really ever get to eat a full meal. She said she takes a couple of bites and then loses her appetite because inevitably something is going on with the kids that takes her attention away from her meal.

But I digress...
The reason I wanted to write today is that I wanted to tell you about the fascinating exchange we had with our waitress.

At the end of our meal, our waitress came over and started chatting with us. She was very friendly and it quickly became clear that she is the type that once you start talking with her, you've opened Pandora's box and won't be able to get her to stop talking. Anyway, her English wasn't that great, but it was good enough that I could understand her.
She was telling us about how she took this waitressing job because she had a child a couple years ago and they couldn't support the family on just her husband's income. She was telling us how difficult it was to work and have a child and how she sometimes has to bring the baby into work because she can't get a sitter. She also told us about her difficult pregnancy, how she is worried her child has learning disabilities, and on and on (way TMI to be sharing with complete strangers). Anyway, at some point I made some innocuous comment to which she replied, "do you have kids?" I gave her my standard reply, "no, 3 cats", at which point she started talking about the herbs she had taken to help with fertility issues.
She went on and on about the herbs and I started to get the drift of what the point of all this was. She concluded her herbal dissertation with, "so don't give up hope. It can happen for you too!"
This is the type of thing I just DELIGHT IN - shocking the hell out of people and throwing them completely for a loop. So I replied with great gusto, "oh, no. My husband and I don't want kids."
Well, I wish I had a camera to capture the expression on her face because it was just the most comical thing I ever saw. Have you ever seen a cartoon where the character's eyes completely bug out of their head about 10 inches while their mouth drops open about 12 inches in horror? That was her expression. In fact it was so exaggerated that even my friend cracked up at it. Since it was clear from her expression that my statement of horror begged an explanation, I said, "we're very happy the way we are and prefer to devote all our time and attention to each other."
I could tell she was having a difficult time recovering from my horrific statement, but after a few moments she seemed to get ahold of herself. She then said, "you are like the owner's son. He just got married and now he says he doesn't want to have kids. He told me he made this decision after watching me with my kid and said he doesn't want to live that way. Too hard, he says."

It took a while, but eventually we were able to extricate ourselves from the waitress and leave.
Although it's common to get reactions of surprise when I tell people I don't have or want kids, reactions this severe are rare. The thing that continues to fascinate me about people who have reactions like this is that inevitably, they are the same people who go on and on about the stuggles and difficulties of having children. They are the same people who are complaining to you with bags under their eyes about how hard it is. These are not people who are in a la-la fairyland floating on a cloud of joy over parenthood. And yet, despite their physical, mental and spiritual exhaustion, financial stress, and all the many other negative repercussions they suffer from having kids, they simply cannot stretch their minds around the idea that some people may have no interest in such a life.
Fascinating, I tell you. Simply fascinating!
Posted by Childfreeeee at 1:33 AM

But Childfreeee, you are missing the whole point! It's sooo worth it all! The rewards always outweigh all the bad!


Can you just taste the sarcasm?

Ha ha ha. Yes, I know that's what they are thinking.

Yes, cognitive dissonance is the PERFECT explanation for this! Excellent comment.

That poor waitress is probably trying to conceive another baby right now to make up for horrible people like you... and me :-D

It's so frustrating that there are people out there who really do not understand that they could choose NOT to have kids. How do people not think of that? I just don't get it.

I say it again : thanks so much for your blog! I read it regularly, and it makes me feel good! The french CF websites and forums are still rare.
This post made me smile (this waitress is incredible!. Most of the time, when parents complain about their children (behaviour, cost, etc...), they talk as if these kids had fallen from the sky!
They have forgotten that THEY DECIDED to have these kids!...
Well, how happy i am to be a CF person!

I just love your anecdotes... and it's more than fascinating, because it's pure societal brainwashing! I find no other explanation of the phenomenon, because of the complete paradox of people realising the parental nightmare - and still yet WANT and DESIRE it! Jeez.