Rendell - Put a Sock in It (and you too, Campbell Brown) 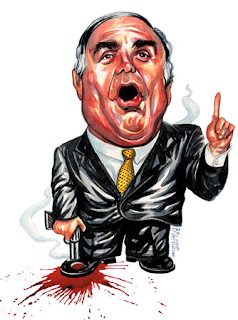 During a news conference yesterday, Governor Ed Rendell of Pennsylvania commented that Arizona Governor, Janet Napolitano is a good choice for Homeland Security Secretary. Here's what he said:

"Janet's perfect for that job. Because for that job, you have to have no life. Janet has no family. Perfect. She can devote, literally, 19-20 hours a day to it."

As would be expected, the media is jumping all over the remark as sexist, which it probably is. I mean, it's doubtful he would have made the same comment about a Joe Napolitano. Can you imagine him saying, "Joe's perfect for the job. He has no family so he has no life."

Setting sexism aside, though, this comment is insulting on another entirely different level, and one which the media would never pick up on. It is insulting to childless and childfree people. Excuse me, Mr. Rendell - so you are saying that we childfree people have NO LIFE? Um, I beg to differ. In fact, I would argue that we have MORE of a life than most people who are saddled with kids.

Oh but that's right -this is America and the only pursuit that constitutes a life is having children. Nothing else qualifies. It doesn't matter if a person pursues higher education, is engaged in the community, maintains meaningful relationships, travels, is engaged in creative projects, does volunteer work, is a devoted spouse, friend, son or daughter, aunt or uncle, sister or brother, employee or Governor of Arizona. The only people who have a life are people with "families", right?

(Oh, and just to be clear, when he says "family", we can be pretty sure he is not talking about a husband, wife and 3 cats.)

Take a moment to watch Rendell in action and then listen to Campbell Brown rip him a new one.

P.S. to Campbell Brown: You rail against Rendell for "perpetuating stereotypes about women", and in the same breath categorize women into 2 categories - "mothers" and "single women". Tell me, Campbell - oh, Champion of Womens' Issues - which of those all-encompassing categories do I fit in?
Posted by Childfreeeee at 9:30 AM

Can I be insulted and laugh at this at the same time?
Unfortunately Rendell's view is not unlike the views of seemingly everyone I know. What? You have no kids? What exactly do you do all day?

I know. There is this idea that you simply are not ALIVE until you get married and have children. If you are missing either one of those, you are a poor, deprived soul.

The whole "family" thing is what really pisses me off! So, let's get this straight, because I have a husband, two dogs, a cat, a mom, a dad, a sister and a step mother but no kids, I don't have a family??

To everyone with that attitude, I say "F*CK YOU!"

And as you mentioned, I'm either a single woman or a mom. Again, f*ck you. That's especially a nice, inclusive attitude to have for those women who wanted to have kids but couldn't. Some people really need to get their heads out of their asses...