How often do we childfree people have to endure their self-congratulating and their holier-than-thou conceitful arrogance over how selfless they are and how their life was so meaningless before they had children and how NOW they are Mother Teresa incarnate because their life is all about their children and taking care of their children and putting the needs of others before their own (implying, of course, that YOU - the pitiable, confused, self-absorbed, materialistic, hedonist creature - are far less evolved).
Yet, amazingly, from these same saintly parents, I witness scenes like this every Christmas season: 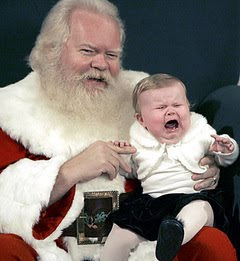 And who, pray tell, is placing this terrorized child on Santa's lap? Why, it is said sanctimonious parent who -in her relentless quest to get the requisite Santa photo - will kick her child's psychological well-being to the curb if she has to. There are some things that are just too important to miss out on and this is one of them! What will Aunt Martha think she doesn't receive a Santa photo?

I've witnessed this scene many times over the years and again just last night while at the mall. As I exited Macy's, I heard this God-awful screaming - like a child was being killed. It was coming from Santa's Village in the mall court and there, sitting on Santa's lap was this poor terrorized child, beet red and screaming his lungs out. His mother had placed him on Santa's lap, despite the child's feeble attempts to cling onto his mother for dear life. My heart broke for the little tyke as I observed the scene. He was kicking and flailing his arms and legs, screeching in terror and reaching out desperately for his mother, who was standing next to the camera elf making silly noises and faces and clapping her hands like a cymbal monkey to convince the child that this is FUNNNNN! Hurray! Look at mommy! Isn't this fun!!?? Santa is a NICE MAN! (clap clap clap)
Dad joins in, and then little sister and now the whole family is in on the abuse. The baby will have no part of it and screams louder. Now he is so upset he is gasping for air and turning blue. The elf finally gives up and takes the photo. Santa gives a hearty chuckle. A terrorized child memorialized for eternity.

Now, isn't this what Christmas is all about?

Once the photo is taken, mom runs over to rescue the screaming child from Santa's lap. She picks him up and presses him against her, consoling him and patting his back. The child is grasping onto her like a Titantic survivor clinging to a lifeboat. "It's all over now. Now that wasn't so bad, was it?" The mom and dad are giggling between themselves with a knowing look as if to say, "oh, the things we have to go through as parents" (as though torturing a child like this is some kind of parental obligation).

Yes folks, these are the same people who look down their noses at the childfree for our "selfishness".

Isn't that like Santa calling the Pillsbury Doughboy fat?

Posted by Childfreeeee at 6:03 AM

Oh. My. God! This post hit home... the other day my friend posted a photo on her blog almost identical to the one you posted... and I thought the same thing!! I don't GET the obsession with the damn Santa photos. The poor kid... and yet god FORBID if you made their child cry like that!!

Such a great post. It's so sad when I see parents forcing kids to do things they don't want to just so the parents can be satisfied(whether its sitting on Santa's lap or playing Little League). Really? You think you're ever going to look back at that photo and be proud of what you did to your kid? Is that going to be the photo you send out to friends and family. "Oh, look at Timmy, so happy this Christmas. Aren't we such good parents for not denying him this experience."

As a child, I NEVER wanted to sit on Santa's lap. And it confused the hell out of me that I wasn't allowed to talk to strangers, yet you are placing me on this old dude's lap and I'm supposed to tell him what I want for Christmas. Can't I just write a letter?

Christmas photos with the kids can be cute, but here's a hint: if your kid is screaming bloody murder, it shouldn't be with Santa (or the Easter Bunny, or Mickey Mouse, or any other variety of costumed characters related to a holiday or setting, for that matter)! I mean, what's wrong with getting the kid one of those cute stuffed Coca-cola bears and taking a picture with that? Or under the kid's first Christmas tree? Or stocking? Or any number of things that won't result in a horror scene like that?

The kid didn't want a picture with Santa, the parents did, so they put that kid through all sorts of distress just to get what they wanted. And they call the childfree selfish. Jeez!

Or here's an idea: how about a nice family picture since I really couldn't give a rat's ass about a picture of your spawn. YOU are my friend, not your kid!

I'm so glad I never had to do that tradition, it sounds like something you'd be left terrorized from.

Many people have children just so they can live out a fantasy and check such things off their "having a kid" list. On Santa's lap: check. First day of school: check. First missing tooth: check. It's about them and their needs, not raising a healthy, well-adjusted human being.

I suppose these photos are also marking memories, but who wants memories that involve you torturing your child?

Great post and comments. The whole Santa topic gets me too riled up, really.

If you tell your kids that some fat guy (who isn't Dad) is coming down the chimney to deliver presents to them...THAT'S A LIE, PEOPLE!!

Why is it okay to lie to children? Aren't we supposed to teach them to be honest?

Oh, but Santa means the spirit of Christmas! (Then stop lying and just say that.)

Oh, but I love to see the look on my kids' faces when they wait for Santa! (Imagine their disappointment when they find out you've been LYING this whole time).

As if lying isn't bad enough...let's terrorize kids by making them sit on some strange guy's lap!

Most parents are so unspeakably selfish. :(

OK, OK, I admit it -- when I adopted my first cat, I brought her to Petco to have her picture taken on Santa's lap. I have never done it since. Maybe I should have looked at my own picture with Santa first. LOL

Barb, we've done that too! But the difference is, our cats were screaming in terror. In fact, they really didn't seem to mind at all. Had they been screaming in terror like the poor children I have witnessed on Santa's lap, I wouldn't have subjected them to it.

I meant to say our cats WEREN'T screaming in terror.

Oh, this pisses me off. We had HawkBaby's picture with Santa recently and she enjoyed it. Had she resisted, we would've immediately gone. I want her to have good memories.

I can't stand these parents who view their children as property and disrespect their boundaries. Sanctimonious is right, because a lot of these idiots makes babies because they want a little girl to dress up or a little boy who looks like them and can toss a football around. I've tried to get some of these people to come clean, but they won't. Nope, they're "blessed", even though they complain about not being able to afford things, while they continue to spawn. They get really defensive when questioned, because they know they suck.

Unfortunately the story you relate is not an isolated event. Behold Sketchy Santas.

It's also okay to talk baby-talk to pets, but not to children. :)

This is a great post, and so true. It seems that parenthood is no longer about the raising of, and caring for the needs of, a child, but the fulfilling of a fantasyland of "experiences" for the parent. Many parents - we all know some, I'm sure - have a warped view of what their life with children will/should be, so they set up these tableaus of "the perfect childhood" and force their children through events and activities, snapping pics throughout, that will validate and prove they gave their childhood this wonderful life.

It's a bit off-topic, but I read a great opinion piece on the entitlement of parents this morning, thought you might enjoy:

My cat was not a happy camper, but I was a first time cat parent and didn't know better. Needless to say, I never brought her or any of the cats I later adopted to that event. One of my cats might tolerate it, though -- he used to be a therapy cat my husband and I would bring to visit folks at a nursing/rehab home. But it isn't worth the trouble.

My thing is, why the hell is the brat screaming any damn way?! NOTHING makes me contemplate violence like a screaming child....that's why I KNOW they are not meant for me!

I work with a woman who loves to drag her kids to Disney on Ice and other things that have people in big costumes. She admits that her children are terrified of people in costumes and they scream and cry. I bet the other audience members really enjoyed having to listen to her scared children wail the entire time. She also complains about how much those events costs. I don’t get why it doesn’t occur to her that her children aren’t having fun and her kids are ruining the event for everyone within earshot.