Bucolia Interrupted (and a Plan Hatched) 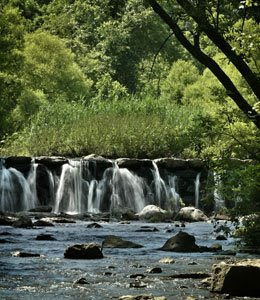 Well, it happened again - an otherwise enjoyable and relaxing outing abruptly screeched to a halt by loud, obnoxious parents.

Memorial Day was a sublimely gorgeous day - that rare type of day that comes about 5 times a year that is so blissfully perfect, you have to pinch yourself and ask if you are awake, dreaming or on narcotics. Because the weather was so drop-dead gorgeous, we decided not to do our planned gardening and instead, we headed off to a beautiful state park in Pennsylvania to chill and be together. If you picture the perfect image of Pennsylvania countryside, this park embodies it - rolling hills, beautiful trees and streams - nothing but beauty everywhere. Ah, just what the doctor ordered!
So we found a nice secluded spot with no other people around, set up our lounge chairs, a little portable table, some drinks and snacks and settled in for a long afternoon of reading, talking, dozing and blissful chilling. For about 3 hours we were in Mother Nature Zen Heaven, surrounded by nothing but the sound of birds chirping and leaves rustling. I took a nice nap. Hubby listened to tunes on his IPod. I finished a good book I had been reading. We took a nature hike and then settled back into our lounge chairs for some more chill time. We told each other we need to do this nature chilling thing more often.
And then, they arrived. A couple and their 3 year old daughter. We could hear them coming from 100 yards away - the mother, particularly - with her high-pitched, 200 decibel voice screeching over the bucolic landscape. Hubby and I looked at each other with the "oh no" look. We just KNEW they would have to plant themselves right next to us. After all, the park only encompasses 2,600 acres - why not sit right next to that lone quiet couple who obviously are enjoying some peaceful time together? They literally plopped themselves down 10 feet from where we were sitting and didn't shut up the entire fucking time they were there.
We only lasted there another 20 minutes or so because the noise of the mother drove us out. The entire time they were there she was yammering at the daughter, again, at 200 decibels...telling her how to pose for photos (criticizing her for not smiling the right way, trying to coax a perfect pose out of her while the girl was sitting in a tree), laughing (cackling), blah, blah, blah, blah, blah, blah, blah FULL VOLUME. Imagine being in a nightclub with a live band playing. Know how loudly you have to yell so the other person can hear you? That's how loud this woman was talking and laughing. I looked over at her several times with my "shut the fuck up" look, but like most people with kids, this woman was completely oblivious to the rest of the world. Remember, once a person has kids, everyone else's shit has to come to a stop and the entire world revolves around THEM and THEIR KIDS and THEIR NOISE and THEIR STUFF and THEM THEM THEM THEM THEM THEM THEM. Everyone look at us! Look at our adorable daughter!!!! LOOK LOOK LOOK!!!! Kids kids kids! The world revolves around kids! Stop what you are doing! Stop reading! Stop talking! Stop dozing and LOOK AT US!!!! Listen to our noise! Watch our antics! We are the circus and we have come to your town!!!!
I thought about my promise to you that the next time a parent interrupted the atmosphere with their obnoxiousness, I would say something, but I figured it wouldn't be appropriate outdoors in a public park where people have a right to talk as loudly as they want. I kept my silence. This time.
We were getting hungry anyway so we decided to pack up our stuff and head off to a local restaurant for dinner. In the car, I thought I smelled something burning. It was hubby's mental wheels spinning. He suddenly busted out laughing about a plan he was hatching for how to handle similar situations in the future.
Hubby is a drummer as and such, has a nice variety of drums. One of them is an African drum that I bought for him some years ago. It's mostly decorative and we don't use it much, but it has a jarring tone when hit with a drumstick. Here's hubby's plan. We will carry the drum and a drumstick in the trunk of our car. The next time we are out someplace and a parent is ruining the atmosphere with their inconsiderate loudness, hubby will whip out the drum and start banging on it - frenetically, like one of those toy cymbal monkeys. He'll bang and bang and bang until the obnoxiousness of his drumming drives them away. We'll see how they like a taste of their own medicine! Ha! I almost spit out my soda when he told me his hatched plan. The ridiculousness of him sitting there banging a drum for no reason really tickled my funny bone. I decided that this hatched plan is SO funny, I am going to video tape it and then post the video here for your entertainment. I don't know when this will happen, but we have already put the drum in our trunk and now we're just waiting (and daring) a parent to interrupt our blissfulness!!!


Posted by Childfreeeee at 4:52 PM

I think your plan is BRILLIANT. We don't have such a drum so I'm thinking we should pick-up an air horn and use it when we are surrounded by squealing snotmonsters.

LOL!!! You are too funny. I can so totally relate to your entire post. It's dead on. I can't wait to see the video!!!

I hear you (quietly). I've been working on a habitat garden in my yard for a couple of years now. Weekdays, when it's quiet, there are all kinds of birds around, some I've never seen before. But after school and weekends? Fuggedaboudit.

That's why I have to shake my head when I read news articles about how kids are out of touch with nature. It's not just the TV and the computer keeping them indoors. It's that when they're outside, or in parks, they make so much noise all the wildlife leaves the area.