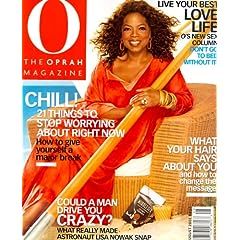 During my lunch break today, I grabbed an old issue of Oprah's magazine and sat down for a little mindless lunch hour escape.

There was an article about 21 Things to Stop Worrying About Right Now and here's one of the things, according to Oprah's magazine, that women should stop worrying about:

The clock is ticking, but I'm not sure I want a child - yet I worry that if I don't have one, I'll regret it when it's too late.

Gail Saltz, MD: "There are parts of life where you can compromise, but not here: You either have a child or don't.

The fear of regretting that you didn't have a child is not the best reason to have one. That said, rarely have I seen a patient who regretted becoming a mother, because once the baby is in the world, the woman loves it. Usually, the woman wants to be a parent and it's her spouse who isn't sure; he goes along with it because he listens to her fear of regret. Yet, when the baby is born, he doesn't regret it either; he loves it too.

On the other hand, I have had patients who've regretted not having children. The good news is, there are so many ways you can rectify that, including adoption and IVF."

Dumb (and oh-so-predictable) advice. Here's my advice, which I guarantee you will never read in O (or any other womens' magazine):

First of all, kudos to you for realizing that having children is a choice, not a given and for putting thought into this life-altering decision, something that very, very few people do.

There are parts of life where you can compromise, but not here: having a child is something you should do only if you have a burning desire and are 110% certain that you want it with the entire strength of your being and if you are willing to sacrifice your life for it (because you will). Even if you do have the burning desire for a child, the decision should not be taken lightly because although it would be terrible to regret not having a child, it would be far
worse to regret having one. Once you have that child, you can't change your mind and give it back. Once you walk down that path, you're on it for life. This is why you don't often hear mothers talking openly about their regrets of being mothers. It is too painful for many of them to admit aloud their regrets, for there is nothing they can do to rectify their situation. Motherhood is a prison from which a woman can not easily escape.

Your fear of regret probably comes not from yourself but from the brainwashing you (and all women) have received your entire life telling you that the only way you can truly be happy and fulfilled as a woman is to have a child and that if you don't have a child, you will regret it later. This brainwashing is a full-on assault and is coming at you from all angles - your friends, family, the media - even women's magazines like O.

Well I am here to tell you differently. If you have a child, of course you will love the child, but that doesn't mean motherhood is the optimal choice and the lifestyle that will make you the happiest. Who's to say you wouldn't be happier with a life free of children? The regrets and loss of not having children are frequently spoken of, but what about the regrets and loss incurred in having children? If you have a child, will you regret the loss of your freedom, your autonomy, your identity, your peace of mind, your financial comfort, your marital happiness, your sex life, your friendships, to name a few? The losses a mother incurs are a well-kept secret but they are real and should be considered very carefully.

Look around you at all the mothers you know and ask yourself how many of them seem to be truly happy and enjoying their lives and their marriages. Do most of them seem happier than you? If not, ask yourself why you would want a life that is no happier than yours or that is less happy. Is this fear of regret really coming from you, or from another source? And if that source happens to be Oprah's magazine, just remember that Oprah is happily childfree by choice and is the last person who should be publishing magazine articles telling women to go ahead and have children even though they are not sure they want them.

Posted by Childfreeeee at 3:30 PM

Stupid and irresponsible advice, indeed!
When even Oprah herself does not follow it, ( being childfree...) how can she allow such a stupid article to come out in HER magazine?
By the way, you childfree women who have such interesting, informative and amusing blogs, should consider starting a REAL magazine for us , childfree folks...That would be so cool!

I'll take YOUR advice any day over that tripe. Being childfree is something I NEVER regret!

I certainly hope you submit that to the editor of Oprah. While they will more then likely never print it they will acknowledge at least two of their readers are child-free; you and Oprah.