All My (Pronatalist) Children 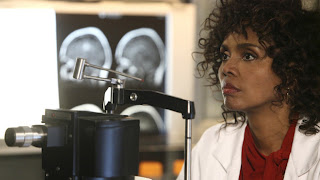 My friend Amy emailed me this letter and gave me permission to post it here.

"Ugh, I couldn't run from my television to the computer to message you fast enough after today's All My Children. This is definitely relevant!

On the show, there is a recently-returned couple, Angie and Jesse. They were a supercouple in the 80s, and the notable thing is that they were, by all measurements, the first black supercouple on a soap. Jesse died, Angie hung on a few more years, then they were both off the show. Fast-forward to now, Jesse has returned from the dead, and he and Angie are remarried. They have a grown son who is a practicing doctor, so that makes him at least 30. They were young when they had him, but that still makes Angie around 50. She and her husband each have another child from other marriages, so that makes three who are currently part of their lives.

Angie is a doctor, and because of a patient she treated a few weeks ago without gloves or a mask, she now has a ridiculously long-named infection that could make her go blind (and which she has not yet told her husband about, for no good reason). She is currently on an experimental drug that could SAVE HER VISION. So that she could continue to practice medicine and save lives, as well as continue to see her loved ones and all of their successes and milestones etc. etc. Sounds great, right?

Not so much. Because today, Angie has learned that, by some "miracle" (their choice of words, not mine)...she is pregnant. Surprise! And her specialist who is treating her strange infection has told her that she should consult with her OB/GYN, but that he would recommend that she discontinue the experimental drug if she plans to continue her pregnancy. Leaving aside entirely why this would be a surprise (if they haven't figured out how to use protection by the time they are 50, I can only shake my head in sorrow), my first thought was...this is a question? A woman that age is going to choose continuing a high risk pregnancy for an uncertain outcome (Down syndrome or something else), when she already has three children in her life, over her SIGHT???

I found myself wondering, could the show that brought us daytime's first legal abortion (Susan Lucci's character, Erica Kane, had one in 1973 — never mind that the ABORTED FETUS came back as a grown man a few years ago, but died anyway so karma course-corrected on that one!) maybe make the right choice in 2010? Or are they going to go with the old, tired pro-natalist stance that seems to be practically mandatory on soaps these days? I wondered how long I would have to wait to find out, but then later that episode, Jesse wondered why she was turning down champagne, and jokingly asked if she was pregnant...and she revealed that she was, with many tears and cries of "Miracle!"

So, at least for *now*, she's made her pro-natalist bed and will have to lie in it. But I am holding out hope that she will eventually reveal the truth about her infection to her husband, and they will discuss it together, and then make an INFORMED CHOICE — hopefully the right one — about whether or not to continue this pregnancy. In my mind, there's no choice, aside from the remote possibility that someone was a devout Catholic: at that age, with the likely risk of complications, PLUS the wrinkle about her sight and the experimental drug, I'd opt to have the abortion. But soaps are choosing that option far less these days, if at all (if they need to terminate a pregnancy there's always the patented fall-down-the-stairs, which absolves the character of the "stain" of choosing to end the pregnancy, ugh). To me, it seems colossally selfish to choose anything but termination. If she goes blind, her family will be forced to provide a certain higher level of care for her for the rest of her life, whether that's in the form of a dog, an assistant, special equipment for the home, etc. etc. But as we know so well, even the horror of GOING BLIND is trumped by the perceived magical wonderfulness of a baby, which is believed to be able to FIX ANYTHING. How many unhappy spouses have been suckered in by *that* one, huh?

Augh, I'm so annoyed with All My Children right now I could spit! Aside from the silver lining for me of knowing there's a community (yours!) that understands, I hope you can find something useful in this rant for the blog.

Labels: All My Children

Wait...what? An aborted fetus came back to life? That sounds...hmmm... kind of weird and awesome. It makes me think that soaps are even more craptastic than I had ever imagined. I've never seen any, and I've never gotten the appeal. Maybe I should start watching.

But on topic (sorry), I was just reading the other day about how unintended pregnancies are up for the over-40 crowd. See here: http://www.rhrealitycheck.org/blog/2010/08/04/grownup-guide-birth-control. I don't know if these women (and their partners) just haven't mastered birth control or what. (I never have to think about my Mirena IUD, and I don't get a period, either, so I plan to have one of these nifty devices in my cervix from here until menopause.) But maybe this is partially because of the messages we get from the media and (sometimes) from our doctors about fertility. I think the common "wisdom" now is that fertility begins declining at what, 26? Maybe some women think that by the time they're in their forties they just aren't fertile and that accidental pregnancy would be rare? That doesn't absolve them from taking responsibility for their own bodies, of course, but it might account for some of this. Women aren't as fertile in their 40s as in their 20s, certainly, but that doesn't make it impossible. Anyway, it's an interesting phenomenon.

Soaps are so absolutely hilarious with all of their drama and folks coming back fromt he dead. Anyhow, it's a no brainer if you asked me. Abort.

I don't get that logic, either. I know of women who, when they get knocked up late in life accidentally, have an abortion because they don't want to deal with a kid when they're that old. If they were ill with some sort of disease that could be cured but that would end the pregnancy, I'm pretty sure most people would opt to abort. I guess you have to take it with a grain of salt...it IS only a soap opera, right?

I'm not surprised. On soap operas, coming back from the dead is second only to marrying your grandpa. Getting pregnant used to be scandalous on these shows, in and of itself, but I guess now so many children are born out of wedlock (or unplanned/at an inconvenient time) that women would be insulted if a show acted like it was scandalous, so now they have to spice it up with all these hairy details.

She's right, though. We're in a pro-natalist cycle right now. Hollywood was the first to jump on the feminist bandwagon in the 60s and 70s, and now as society swings back away from that, Hollywood just mirrors it. This annoys me greatly, the way our society can't learn from the mistakes of the past. Another huge group of men and women has to make themselves utterly miserable before they can figure out that's not how they want to live.

>> On soap operas, coming back from the dead is second only to marrying your grandpa. <<

Hey, Christy, it's actually more likely that you'd almost have sex with your heretofore-unknown half-sibling rather than marry your grandpa. :-)

And Ang, yes, that's exactly what happened: the soap that was the most socially-conscious redacted its own history-making storyline of having daytime's first legal abortion. We learned that Erica — who'd gotten pregnant while married to Tom (Catholic), and who was in the prime of her modeling career, and thus made the choice to have an abortion — had actually undergone the procedure at the hands of a doctor who was obsessed with her. He took the fetus, implanted it in his wife, and raised the child as his own son. We met him when he came back to the show as an adult to get to know Erica without telling her who he was (and tried to sabotage her business, etc. etc.). Then they made peace, and he was starting to fit in on the canvas as the great Erica Kane's son...only to be killed after he inexplicably went kind of bsc and hurt some people. It was awful, and many people in the soap viewing community were flabbergasted that AMC and ABC Daytime would squander their place in history for a character that they ended up killing off fairly quickly, anyway.

But to me, it was a great, big, huge honking red flag that the times they were a-changing, and not for the better. We joke now, on the soap forums, that characters are simply not allowed to terminate pregnancies unless they happen accidentally (fall down the stairs), but that seems to be the current status quo.

OMG, that is disgusting. Plus, I find it extraordinarily UNBELIEVABLE. I had my last menstrual period at 48, so 50+ pregnancies...not so much for credibilty. But then most of the the soap plotlines are not credible anyway. Of course, I never worried about getting pregnant after I had a tubal at 28. I'm 58 now, a widow & still NO regrets about choosing the childFREE life.