Childfree and Painting the World Green 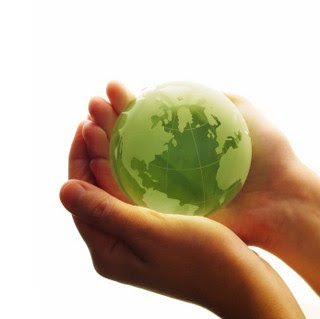 Global warming sucks. Every time I turn on the news, it seems there is yet more bad news about the state of our planet: the melting of ice caps, the warming of our climate, the rising of sea levels, the predictions of entire shorelines being washed away in the not-too-distant future (there go my trips to the Maryland shore) - non-stop doom and gloom. It is so depressing, that I confess...when I come across news on this issue, I turn the page, or turn off the television. I feel anxious and helpless. I do what I can to save energy and to live as green as I can, but I am not kidding myself. How much difference can one person really make?

Well, according to a new study from statisticians at Oregon State University, apparently I make a big difference, simply because I am childfree.

The carbon legacy and greenhouse gas impact of an extra child is almost 20 times more important than some of the other environmentally sensitive practices people might employ their entire lives – things like driving a high mileage car, recycling, or using energy-efficient appliances and light bulbs.

In other words, a typical American who tries to live as green as possible - driving a fuel-efficient car, recycling, using efficient light bulbs, using energy-saving appliances, etc. - undoes the positive impact of his green efforts 40 times over by having 2 children - increasing his carbon footprint 40 times.

The researchers smartly point out that curbing population growth is rarely addressed in discussions about climate change:

In this debate, very little attention has been given to the overwhelming importance of reproductive choice...When an individual produces a child – and that child potentially produces more descendants in the future – the effect on the environment can be many times the impact produced by a person during their lifetime.

Under current conditions in the U.S., for instance, each child ultimately adds about 9,441 metric tons of carbon dioxide to the carbon legacy of an average parent –about 5.7 times the lifetime emissions for which, on average, a person is responsible.

While the researchers do not advocate for government regulation of reproduction, they do hope to educate people on the environmental consequences of reproducing.

Some people who are serious about wanting to reduce their 'carbon footprint' on the Earth have one choice available to them that may yield a large long-term benefit - have one less child.

I'll take it a step further. Consider not having any children at all and you'll really do the Earth a big favor.

(Thank you Amy and CFVixen for forwarding me this study).

Posted by Childfreeeee at 9:08 AM

One should be aware of the rebound effect -- an economic phenomena that tends to reduce the benefits the childfree choice on the environment. Fewer people opting to have kids will cause the price of food, diapers, baby chairs, etc. to fall. This makes it more affordable for others to have their own kids who otherwise would not have due to the excessive costs involved. Personally I expect this effect to be small since the evidence is that the majority of parents do not perform a costing analysis when they decided to have children.

This is priceless. Thanks for posting it!

One of the things that worries me about the environment is the way people get so angry over their RIGHT to have as many children as they please.

Guess that trumps everyone's rights to adequate air quality, space, and clean water. Including all those future children who will be occupying the Earth.

I just wrote about this same topic with a link to a Mother Jones article about the eco havoc wrought by babies http://tiwidhak.blogspot.com/2009/08/i-love-my-planet.html

Congratulations! Our selection committee compiled an exclusive list of the Top 100 Child free Blogs, and yours was included! Check it out at http://thedailyreviewer.com/top/Childfree

You can claim your Top 100 Blogs Award Badge at http://thedailyreviewer.com/pages/badges

Reading the comments on the Mother Jones article I linked is depressing. (An SFgate article on the same topic had even creepier replies.)

"If there are no people left, either from sterilization or some major catastrophe as many of the gloom and doomers here keep talking about or both, then who cares about our carbon footprint because noone will be here anyway."
So only human enjoyment of the planet matters.

"The green movement is a red herring. this 'carbon footprint' nonsense is wrong. The SUN is driving warming- and cooling- on Earth and the others in the solar system. You guys talking about stopping human growth- by all means, step to the front of the line. As for me, I'll be far from that event. Babies create the future. All this drivel about carbon taxes is gonna be the beginning of bad times- if the world doesn't WAKE UP to this global warming scam. I highly recommend that you do research on sunspots and the correlation of global weather to it."
Yes, why listen to science? Babies are the future!

"All you non reproductive folks are completely sick and serve no purpose on earth, if your a disaster to society and are a do nothing, you shouldnt reproduce but if you are societies right hand and help your brother push forward, give yourself a successor and teach him-her to do the same. Society needs to wake up and stop thinking like machines."
Yes, the earth needs more humans. I am so glad this person is having children. Fantastic grammar and spelling.

"If there are no people left, either from sterilization or some major catastrophe as many of the gloom and doomers here keep talking about or both, then who cares about our carbon footprint because noone will be here anyway."

This one makes me want to floss my brain. How many ancient civilizations have crashed because they overexploited the environment immediately around them?

The ironic thing is these are the people who will tell you we are more ADVANCED than they were.

Erm, you mean we learned the lessons of history and stopped repeating the same mistakes?

Right. Instead of taking care of the 1 million + children in the US alone that need families, let's have some of our own!

I think a better option would be to press on, and to continue to mentor and be a positive example to everyone around you - child and adult alike. THAT would be better than teaching just your offspring: you can teach an entire village instead!

We seem to be coming down with "a case of the humans".

Now is probably a good time to have another dose of Nina Paley's "The Stork is the bird of war."