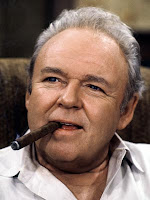 Today I thought I would share a story with you about my father. This is the true story of the only compliment he ever paid me. Yes, you read correctly. My father has given me the total of one compliment in the entire 40-odd years of my life to date. So that you will be better able to comprehend this, I need to describe him a little for you.


If you have seen the 1970s sitcom All in the Family and are familiar with the character of Archie Bunker, you pretty much have met my father. In his heart he is a decent person, I know he loves me, and he has some good traits, for example he can be very helpful - but his exterior is gruff - complaining, criticizing and delighting in being a bigot. He even walks like Archie Bunker. He is the type who will hover over you when you are cooking so he can point out everything you are doing incorrectly and what a mess you are making (I even nicknamed him hovercraft, which I found outrageously funny and which I could tell he thought was funny too, although he tried to act annoyed). He enjoys (and is fixated on) seeing people get punished, which I suspect may stem from being raised by an abusive German mother. He is politically and socially conservative to the extreme and sees everything in black and white. He cannot accept anyone who is different from him, is liberal or who thinks independently. A psychologist might describe him as having an authoritarian personality.
As you might imagine, he and I exist on opposite poles of reality.
My dad has never paid me a compliment, other than an occasional approving nod when eating one of my gourmet family dinners with the occasional comment of "tasty". When I made the honor roll and National Honor Society in high school, he didn't attend the award ceremony or even congratulate me. Ditto for when I got my bachelor degree and later my masters. I can't think of anything I have accomplished in life that has impressed him and if it did, he simply could not bring himself to tell me. It's not in his constitution.
Except for once - the one time he complimented me and rendered me speechless.
I had taken him shopping with me one day to help me purchase tires for my car (my dad is an expert on cars and fixing things and likes to be helpful with things like this). We went to one of those big wholesale clubs which has its own auto and tire department. After picking out the tires, we had a half hour to kill while the mechanics put the tires on the car. So we walked up and down the sterile, flourescent-lit aisles of the store.
While browsing in one of the aisles, there was suddenly a loud ruckus in the next aisle from us. A family with young children was carrying on with such ferocity that everyone in the store was gaping at them. The kids were screaming, the parents were screaming, merchandise was being knocked off store shelves. It was the typical center-of-the-universe-obnoxious-family-disturbing-the-entire-environment scenario which I have often complained about in this blog.
When the ruckus reached a fevered pitch, my father turned to me and said, "you are smart not to have children. Your mother always says you should have kids, but I think it's smart what you're doing." I blinked in disbelief. Was this a compliment from my father? He continued, "your life is so much easier because you don't have kids. If I had to do it all over again, I wouldn't have had kids either." Then, realizing what he was saying to his daughter, he added, "I don't mean that I would give you and your brothers up now - I mean, I am glad you are my kids, but I'm just saying that knowing what I know now, I wouldn't do it again."
My father, "Archie" - the unlikely childfree advocate.
I don't remember how or if I responded, but I believe I was rendered speechless, since being told I am smart or anything positive by my dad is completely novel, uncharted territory.
This was several years ago. Since then, several parents have told me the same thing - that if they could do it all over again, they wouldn't have kids. I've written about many of them here and will continue to do so as I encounter more and more parents who open up to me this way. Of all the parental revelations I have received, though, my dad's will hold a special place in my heart because I know that his revelation to me was a breakthrough for him, and also for our relationship. I realized that somewhere deep inside him and to some extent, he gets me and that's a good feeling.
Posted by Childfreeeee at 9:18 AM

Aw, that made me feel all warm and fuzzy. I am glad his one compliment to you was a big one.

Wow! That's awesome. I know it felt great to hear that.

I wish I could hear something like that from my mother. Unfortunately, I think all I'm going to hear is, "You need to have at least one child so you won't regret not having one later." Um, yeah.

Nice. My dad never hesitated to let me know of his own regret in becoming a parent, though without the softening addendum he gave you. When we'd get in fights he'd be especially nasty, saying "Well, we'll see how YOU do."

I broke ties with him before I could tell him of my decision to remain childfree. Chances are, that'd be the one thing he'd compliment me on, as well.

I just discovered your blog and have been engrossed reading it all morning. I feel particularly compelled to comment on this post because my Dad said the same thing to me a long time ago: not that he regretted having me (an only child) but that he completely understood my husband and I's decision to not reproduce. He still gives me shit about not giving him and my Mom grandchildren (being an only child, it's all on me), but this is accompanied by a I-get-it-and-respect-you wink.

Thanks for your comment and glad you found me!

Happy to hear your dad respects your decision, even if he ribs you from time to time.

Ah! I spent about 20 minutes writing a comment and it disappeared. Basically I just wanted to say that I empathize greatly. I'll just get to my main point.

I became aware recently that my father has only given me maybe a handful of very sporadic and generic compliments in my life. I was pretty shocked. But after that dawned on me what really hurt was the realization that my dad has never, in my 28 years on this earth, said anything remotely positive about how I look. He has never given anything close to a compliment. Never said I was pretty, or beautiful. Never said he liked my shoes, or acknowledged a new haircut. He's said quite a few negative and critical things. For example he once said when I was a teenager (already depressed, mind you) "you shouldn't wear your nose ring when we go out to eat, it will make people sick, no one wants to look at that when they're eating".

Luckily I not totally completely screwed up from that, ha, but it does probably has a lot to do with my having low self esteem, no self confidence, being embarrassed of myself with out makeup, ashamed of my body.

These men do not deserve the title of dad or father. Saying positive things to your your little girl at least once in a while through out her life should be fucking easy. Sorry, it gets my blood boiling. Had he said nice things to me, maybe i'd be a different person. Not the hopeless shell of a person I am.

Anyway, I'm glad your father said something nice at least once. Hang in there. Good luck.