There are some topics that I just can't stop myself from writing about over and over again because they perpetually fascinate me. Let's see...there's the "obnoxious parents with kids disrupting peaceful environments" (God knows how I love to harp on that topic) and my other favorite, the "media obsession with celebuspawn". Well, given that the Messiahs of all celebrities, Brad Pitt and Angelina Jolie, just added yet 2 more anklebiters to their brood, I thought I would write about them today.

First, let me say that I realize that Brad Pitt and Angelina Jolie are freakishly good-looking. They are the kind of people you just look and say, "how on earth is it possible for any person to be that gorgeous, let alone TWO people in one household?" Their gorgeousness is blinding. It makes sense, then, that the public is curious about what their spawn would look like. After all, as far as babies go, they just don't come any cuter than little Shiloh. I mean, just LOOK at this kid. Having said that, let's get real here. A newborn baby isn't all that interesting to look at and it's pretty much impossible to tell the degree to which a newborn will eventually become a freak of nature in the looks department. With the exception of possibly hair and skin color, newborn babies pretty much look alike and are non-descript. Take the aforementioned gorgeous Shiloh. Here she is on her first People magazine cover when she was a newborn.

While we're on the subject of freakish celebs, have you heard the rumor about little Suri Cruise (the daughter of Tom Cruise and Katie Holmes)? For years, rumors have circulated that Tom Cruise is gay and his marriage to Katie Holmes is an arranged sham. Most people know that Tom Cruise is a rabid Scientologist. The rumor about Suri is that she was conceived via invitro fertilization using the frozen sperm of late founder of Scientology, L. Ron Hubbard.

Wait - before you laugh too hard, take a look at little Suri and tell me which man she most resembles. 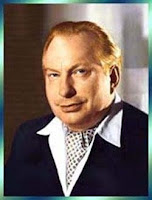 Posted by Childfreeeee at 12:34 PM

OMG, there really is a resemblance!

I was one of the few people on Earth who did NOT think Suri was cute. I think she's cuter now that she is a little older, but I'm pretty ambivalent when it comes to that kind of thing.

I'm not really sure how much of these two is "natural" beauty and how much of it is surgical. I seem to recall pictures of Angie when she was younger with a rounder face and nose and she was cute, but not traditionally "beautiful".

If it's true, their kids won't necessarily be gorgeous until they get a plastic surgeon to work on them.

Meanwhile, I remember baby/toddler pictures of Zahara and she was really a beautiful baby (that's why Angie chose her). I don't think Shiloh is all that cute.

Funny how we never see pictures of Zahara anymore. Is that because she outshines the little princess?

I have to disagree with you...I think Shiloh is way cuter!

Now that's one celebuspawn rumor I'd never heard. There is a resemblance. That's CRAZY!!! If Katie did actually do that I hope she is being WELL compensated for her sham-life. I can't think of anything that would make me willing to go along w/such a lie.

I agree that most babies look exactly the same except for gross abnormalities. Photoshop any two newborns into a pic w/Brangelina and voila - $14 million dollar pics.

It's such a sad obsession... Imagine how these kids are going to be at 16; I bet they make Paris Hilton look like a nun.

Ok, the resemblance is rather freaky. I've also heard that Tom put out the word that he needed to marry a younger Hollywood starlet to boost his sagging career. Katie was the one who accepted because it would probably boost her somewhat blah career too. But I doubt one can ever know the truth behind the craziness that is Hollywood. Although, with Tom (and John Travolta and Kelly Preston) being affiliated with Scientology, it just adds another bizarre layer to the fruit pudding!