"That's Just What You Did" 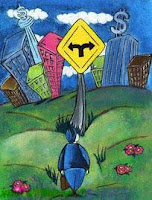 Not long ago I was on television talking about being childfree. It happened last minute when someone I work with (who schedules these quicky human interest "news" stories all the time) begged me because they were doing a spot on married couples who choose not to have kids and they needed one of those ever-so-difficult-to-locate childfree types. Despite the fact that I looked like hell that day, was wearing unflattering colors and was completely and totally unprepared and caught off guard, I reluctantly agreed to do the spot, convincing myself of the importance of being an advocate for the severely-marginalized childfree lifestyle. Although I cringed to see how horrible I looked, I admit it turned out pretty well in the end (I was relieved that they used the 2 articulate sentences from my interview with them).

Anyway, a week or so later, I decided to go out for a couple slices of pizza at my favorite pizza place across the street from my office. I have pizza there at least once every couple weeks - it's gooooooood ~ heavy on the cheese and grease. Immediately, the owner came running over and excitedly asked (in her adorable Greek accent), "are you on television?!!???" Now, I get this question a lot because I happen to look like a pretty well-known celebrity, and I had forgotten about the childfree "news" spot so I was all ready to give her my usual reply that "no, I know I look like so-and-so, but I am not her. I wish I had her money, though." But then, I realized she was talking about the childfree spot.

She had this star-struck look on her face, as though by nature of my being on this low-budget local news spot, I was some kind of celebrity (which made me chuckle to myself) and she inquisitively began asking me questions about choosing not to have kids. After I explained how hubby and I came about our decision and why we love the childfree lifestyle, she nodded approvingly and then said a line that I have often heard from people with kids, "I never even considered not having kids because when I got married, that's just what you did."
That's just what you did - implying that things are somehow different now - that things have changed since the era when she had kids and when I became of child-rearing age. Well, people, let me state with no uncertainty that nothing has changed. Having kids is still just what you do. It's always been just what you do. It will probably always continue to be just what you do. As has been the case throughout humankind's history on earth, people put as much thought into having kids as they do into mindless eating, breathing and screwing.
Just like my friend at the pizza parlor, I was brought up with the relentless messages that having children is what you do. It's part of life and an essential part of life for women especially. It's not a choice, it's a given. Women are never asked if they will have kids - they are asked when they will have kids and a woman who bravely announces she does not want to have children is looked at like she has two heads.

Growing up, I didn't know one single adult who chose not to have kids. Baby dolls were thrust into my hands repeatedly as gifts, despite the fact that I showed no interest in them (although I loved Barbie and her freespirited adult ways). The only words I ever heard associated with not having kids were words like "infertile", "barren", "sterile" and other negative labels that implied that not having kids was some kind of affliction. I never had a childfree role model. Hell, the word childfree was never even used to describe people without children, at least not in the plastic bubble I lived in, although I have recently learned that the term was coined in the early 1970s. No, like most people, childless was the only word I heard to refer to people without kids; a term pregnant with the connotation of lack.
People like my pizza place friend who lament their "choice" to have kids was made because it's just what you did - are unknowingly robbing childfree folks of the credit we deserve. The pressure we have endured to have children has been just as enormous for us as it was for her. The role models of an alternative childfree lifestyle have been non-existent, just as they were for her. The message of having kids is just what you do has been pounded into our heads our entire lives, just as it was for her.

The difference is that despite the fact that having kids is just what you do, we thought about it and did differently anyway. And for this we deserve some credit. Credit for bucking the trend and thinking for ourselves (despite the inevitable fallout of being misunderstood and labeled as misguided and selfish). Credit for questioning the unthinking belief that something is right and preferable just because it is ordinary and customary. Credit for evaluating childrearing with an objective eye and seeing it for what it is - a little bit of something for a whole lot of strain and sacrifice.
So to those who say we are lucky today because of the choice we have now, I say to you - the choice was always there. You just chose not to think, and not to choose.
Posted by Childfreeeee at 5:13 PM

I know...its sad, things haven't really changed much since 1955. We are all expected to follow "the plan." But if people search deep within their psyche they don't have to.

I always thought my #1 priority was to be happy. My life on this world is for my own happiness. If you can't live life how you want to then what point is there of living it?

It's mind boggling that people just pop out kids with little or no thought. I do a lot of home renovations and I won't begin any project without a detailed plan that involves a lot of research into best practices, best materials to do the job, etc. If only other humans did the same sort of in-depth research before having babies. My biggest annoyance is "accidents". A relative of mine just had one, and so did a co-worker. Another co-worker has an accident growing inside her now. And in the case of one of the pregnancies, there was a single birth control method, but it failed. Since I'm an IT guy I always spec a high level of redundancy when we acquire new hardware. Why do people not practice redundant contraception methods? There's still a chance of failure with 2 methods, but the odds of knocking someone up drop significantly if the methods are used correctly. Sorry, I guess I'm ranting. It's just what I do. :)

Gods bless you. Oh, and I felt the same way about my barbie dolls...they were grown ups!